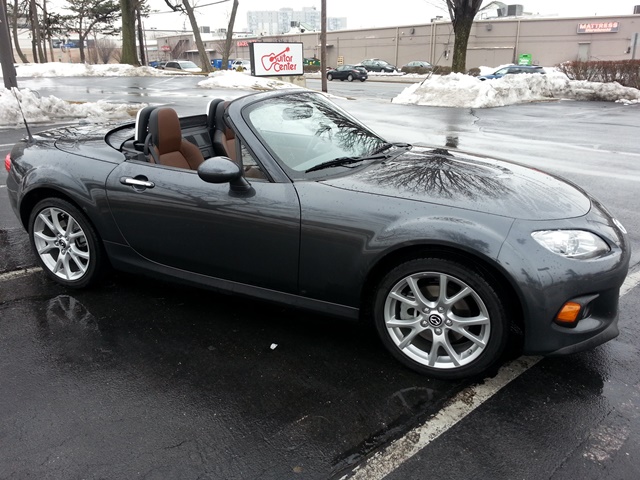 Car enthusiasts have been raving for decades about how awesome and perfect the Mazda MX-5 (otherwise known as Miata) is as a sports car. But then you get so many others complaining about its size, lack of power and “less than masculine” appearance. But there’s something to be said when one specific car has entire racing clubs (and even a professional racing series) devoted to it. It MUST be doing something right.

So I was pretty excited when I heard Mazda would be handing over the keys to a 2015 Mazda MX-5 Miata in Grand Touring spec with a power retractable hardtop (PRHT). Wow, that’s a lot of words to explain such a simple car!

A sports convertible in the winter? 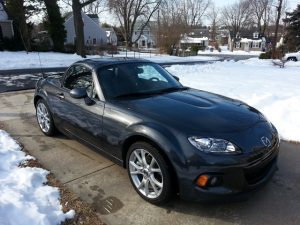 While I was excited to know I was getting the Miata, I was also questioning the timing. I was set to receive it at the end of February, when we still had freezing temps and snow on the ground here in D.C. It’s a rear-wheel drive convertible meant for only open-top driving to have fun, right? Well, it turns out driving in the winter was a perfect test for the MX-5.

Normally I take a freshly-washed car for photos right away, but I couldn’t wait. The sun was shining and rush hour hadn’t hit yet, so I took it out for a quick drive. About 30 minutes later, I pulled back into my driveway with a giant grin on my face. I proceeded to take it right back out, grab lunch for my wife and drive 20 miles to drop it off, just to have a reason to drive it some more. And in all this time, I drove it with the top UP because I was thought it had to be warm out to drive a convertible. I was wrong, but more on that soon.

During the week-long stay of the Miata, we did get a few inches of snow, but as with the Hyundai Genesis the prior week, it had melted enough the next day to not impact test driving. And since it’s a tiny car (even lower than our MINI Cooper, but a bit longer), it’s very easy to clear the snow off. But the big question I had was can you drop the top in cold weather and be comfortable? 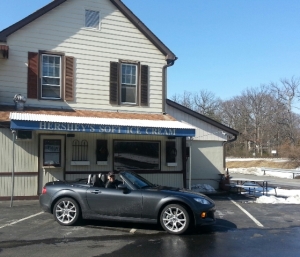 So, ignoring the looks we got from fellow motorists, on the way back from a local trip with my wife, I dropped the top, turned up the heated seats and cranked the ventilation, which has a special setting for “thigh warmers” (there are extra vents that blow onto your thighs that also keep your hands warm). With the windscreen up between the headrests, air never came into the cabin and only the very top of my bald head felt cold air. It was like we were in a warm cocoon. While it may not be practical, the answer is yes, you can definitely drive an MX-5 Miata in 34 degree weather with the top down. (Granted, the neck warmers offered on luxury convertibles from Mercedes would be a nice addition).

But is it enough?

Does the Mazda MX-5 Miata have enough power? Does it have enough options? Can it be a primary vehicle? All great questions, and all with answers that really depend on your situation.

First, POWER. The MX-5 comes with a 2.0 liter I4 engine producing 167hp and 158 torques. Those look like very wimpy numbers, even compared to my wife’s 2007 MINI Cooper S (172hp/177torque), but it’s what it DOES with that power that makes it both a fun and sporty car. Sure, you’re not going to beat a Corvette on most tracks or stoplight drag races (which you shouldn’t do anyway). But you’ll probably out-corner it AND have more fun doing it in the process. But how in the world can you have more fun with less power? Well, there’s a saying: 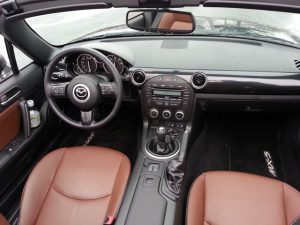 Think about it. You could own a 6-figure supercar that can top 200mph and go 0-60mph in under 4 seconds, but only ever use half of the power safely (and legally) on public roads. OR you could own a low 5-figure Miata that makes you feel like you’re going 90mph when you’re only going 55mph, and can get you around any corner confidently and safely. Basically, you can “race” a Miata around on public roads and probably break no laws, while having a blast every time.

But how does Mazda do it? With only 7 days in the driver’s seat, I can’t fully articulate what others have experienced with this car for decades, but I can say it’s a perfect mix of low weight, great shifting and gearing, a low center of gravity, 50/50 weight distribution, rear-wheel drive and precise steering. The car goes where you want it, has enough OOMPH to zoom-zoom (yeah, I said it) around slower cars when needed and eventually feels like it becomes an extension of yourself. I thought driving a MINI Cooper was fun (I’ve owned 2), but this was a BLAST! 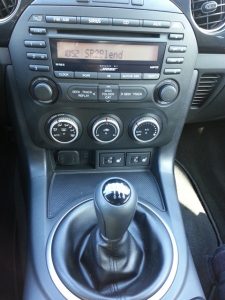 So we’ve covered that while it’s low on the power scale, it’s very high on the fun scale, and you probably won’t get busted for having that fun either. So then we move onto OPTIONS AND PRICING. I hear many car magazine and web articles talking about how it’s “an affordable sports car”, but for just about $33,000 on the window sticker, this car didn’t strike me as affordable at all. However, this is where I need to change my thinking a bit.

I just finished comparing the 2015 Hyundai Sonata Limited with the 2015 Hyundai Genesis RWD 3.8 Sedan, and proved that the Sonata was an amazing value for right around $33k, or the Genesis was insanely overpriced. Either way, with the spec sheet still on my brain from that Sonata, I can’t help but mentally compare the standard/optional features on the similarly priced Sonata and Miata.

Now, I’m going to stop myself right there and admit it’s not fair to compare these vehicles. One is a 5-seat family hauler and the other is a 2-seat convertible sports car. They both have engines and 4 wheels, but serve completely different purposes beyond that. But when I hear the word “affordable”, I need to have a baseline for comparison…and the Miata doesn’t have much competition. Really, when it comes to sporty 2-seat convertibles on the market, you’re looking at the Mazda MX-5 Miata starting at $24,000, and then you’re looking at Mercedes (SLK), Porsche (Boxster), Jaguar (F-Type) and Chevy (Corvette) offerings starting between $44,000-$70,000 for a base model. I won’t include the MINI Roadster because it’s being discontinued (thankfully). 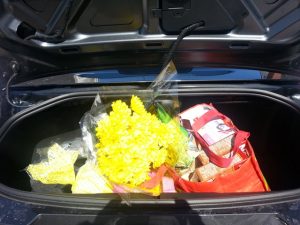 So yes, it’s absolutely affordable when compared to other 2-seat convertibles (or even most convertibles), but not if you’re looking for the most “bang for your buck” option in any vehicle segment. But who is cross-shopping a Miata and a Sonata? No one. That gets me to the question of “Can it be a primary vehicle?“.

I personally know a few people who have run a Miata (and then a Porsche Boxster) as their primary vehicle, and I’ve read about many others, but this is where it just depends on your lifestyle. If it was an automatic, then yes, it could replace my wife’s daily driver (MINI) as she doesn’t haul more than 1 passenger or more than would fit in the trunk more than once a year. When she does, she takes my truck. But I have to admit, I would be a bit upset if I didn’t get to drive this car a few times a week myself, but it definitely couldn’t replace my truck.

So, yes and no, it could be a primary vehicle. But I must admit that I reconsidered doing a big roadtrip in the Miata from MD to NC when I realized how loud 6th gear is at highway speeds. The gearing helps make the car a blast around town and on the track, but I would love if it had one more “over-drive” gear for highway cruising.

But it’s so empty! 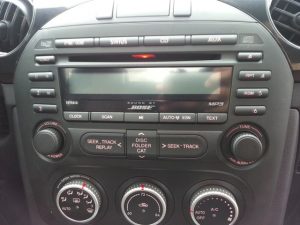 When I first sat down in the Miata, I had to look at the window sticker again to make sure I actually had the features it listed. After driving (and owning) so many new cars with nav screens and tons of buttons, I was surprised that the interior was so minimalist. I felt like I was being cheated of something at $33k, but then I drove it…and then I dropped the top.

In my rethinking of the value proposition of this car, I had to consider the price, the features and the vehicle itself. I could save 10-grand if I just got the base soft top model, but without a garage, I would have much more peace of mind against weather and thieves with the hardtop model I tested. I would definitely also opt for the Premium Package which adds an alarm, advanced keyless entry, bluetooth, SiriusXM and xenon headlights for just under $1,400. But I would consider saving money on the Appearance ($650) and Suspension ($650) packages, but I can’t say how it looks or drives without those options.

But while being minimalist, the interior was also well-planned, for what limited space it offered. My only complaints about ergonomics were that the stereo could have been angled more towards the driver, and the red letters on the screens got washed out in sunlight. Sure, I would have liked more screen real estate to show the song name or channel, but it did the job.

Since my wife’s MINI is getting a bit old and cranky, we did consider whether she would want a Miata. But since she’s used to more “luxury” features (like a screen), we would probably wait for the 2016 Mazda MX-5. But I definitely thought long and hard whether I could buy a used Miata as our weekend “fun car”.

After driving the 2015 Mazda MX-5 Grand Touring PRHT for a week and 262 miles (oh, and 23mpg), I can absolutely say without a doubt that I WANT ONE!

Mazda USA loaned me a Miata for a week with a full tank of gas, a Zoom-Zoom cap and some sunscreen, but did not pay me or influence my review of the vehicle in any way.