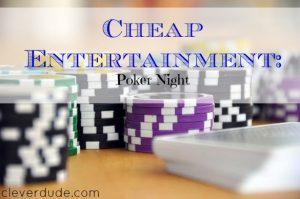 I looked at my cards, and confidently pushed a small stack of chips to the middle of the table. My opponent flipped his cards and smiled.

We’ve tried two different formats, starting with the tournament style, but after a few months the disadvantages caused us to try something a little different. We moved to the continuous play format which is working much better for our particular group.

Each player pays in an agree upon amount (we chose $10), and in return receives a stack of chips. You play until one player has all the chips, the winner taking the entire money pot.

Each chip color is assigned a specific value, and players buy the value of chips of their choosing. We don’t require any specific amount, but most players start out with $20 of chips. We start playing, and keep dealing hands until the last players decide to call it a night. Players can buy in and cash out at any time.

We have a poker night once a month, and it’s something I always look forward to. I bring a snack to share, and a $20 bill. Some nights I leave a winner, and some nights I don’t. But I know that at most a great night with the guys will cost me $20. (And it’s a lot less riskier than, say, online casinos which you could play here)

Not bad at all.

Have you ever had a poker night?