Car Fixed, But What Should I Do With This Extra Battery? 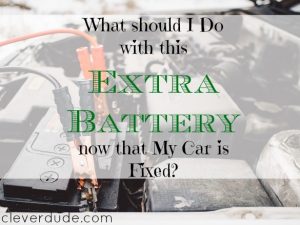 The needed repair for my broken down car wasn’t as bad as I had feared. It wasn’t the alternator after all, it just needed a new battery. After a quick stop at my insurance company’s office to get reimbursed for the tow, the whole ordeal cost me $135. Which is still a sizable unexpected expense, but so much better than it could have been.

My wife and I stopped at the dealership to pick up the car. We paid the bill, gathered the paperwork and were about to walk out the door when my rock star wife asked a very simple question.

â€œHow long ago did we get that battery?â€

It occurred to me at that moment that it didn’t seem like it had been that long. Together we questioned whether that battery, which had been purchased and installed at our local Sears automotive center, was still under warranty. If that were the case, we would need the battery to collect on the warranty. At our request, the service representative made a phone call and a few minutes later a man brought us a dingy looking Die Hard battery with a broken handle.

My mind raced on the way home as I thought about whether I kept the paperwork for the battery, and where it might be located. My constant need to de-clutter has caused several needed documents to be thrown out, resulting in an occasional â€œdiscussionâ€ regarding the need to organize things better.

I sifted through the stack of papers sitting on the kitchen counter that we had removed from the car’s glove compartment. In a gasp of relief I found the receipt from the purchase and installation of the battery. To our surprise, it had been almost three years since we purchased the battery, but it was still under warranty for a few more months.

I did take this opportunity to point out to my wife that I had successfully managed to keep the paperwork for nearly three whole years without throwing it away.

She glared at me as she picked up the phone to call Sears to find out exactly what our options were with the busted battery now that we had just had it replaced by the dealership. I had read some articles about Sears being in a bit of trouble financially so I wasn’t surprised when the man my wife was talking to explained that the automotive center at the Sears in our city was closed.

We would have to go to a Sears in a metropolitan area about 100 miles away to collect on the warranty.

We will be traveling to that area in a few weeks anyway for a family event, so we plan to exchange our busted battery for a new one then. It’s cool and all that we get to collect on our warranty and get a new battery, but exactly what are we going to do with it?

My wife wants to just keep it as a spare, but since we just had a new one put in our car at the dealership we likely won’t need to replace it for several years. We may not even keep the car that long. I suggested we put it on Craig’s list and try to sell it, but she’s not convinced.

What would you do with it?