Can You Return Food After You’ve Eaten It? 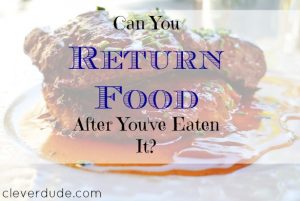 I knew the steak was moist because juices were pooling around it on my plate. My mouth was watering as I sliced into it revealing it was grilled to a perfect medium. My wife and I took bites of our steaks at the exact same time. Her face revealed the exact same response I was having.

The steak was tough and chewy.

We were disappointed because this was our special meal of the week. When we do our weekly meal planing, we have one or two meals that typically are a little higher priced, and are our substitute for eating out. I had picked out some nicely marbled steaks and grilled them exactly the way we like them. However they just weren’t as tender or flavorful as a New York Strip steak should be.

Later that evening, my wife asked me if I still had the receipt.

â€œWhat are you going to do, try to return steaks that we’ve already eaten?â€ I asked.

The next morning she called and talked to the manager of the meat department, describing what we had experienced. The manager stated that sometimes this happens, and the cow from which the steaks came just had tough meat for some reason. Then, to my surprise, the manager invited us to stop by the store and he would hand pick some complementary New York Strip steaks to send home with us!

You know I’m not turning down free steak, right?!?

We’ll be visiting the grocery store later today to pick up our replacement steaks, as well as give the manager a huge, â€œThank You,â€ for the great customer support. While it’s a bummer that we had some dud steaks, it’s impossible for the butcher to know that just by looking at the meat. The willingness of the manager to make it right has earned that grocery store some MAJOR respect points in my book.

Personally I would have just chalked up the experience to a bad cut of meat and eaten the cost (pun intended).  I would have never even thought to ask to be refunded for something outside the control of the meat department.  On the other hand, it makes sense that they would want to make their customers happy by providing the best product possible.

Technically I didn’t return the food after I ate it, but I did get a replacement for getting an inferior product.  It still seemed a little off the wall to “return” a bad steak from a grocery store, don’t you think?

What’s the strangest thing you’ve returned, or received a refund for?