Can You Live On Minimum Wage? 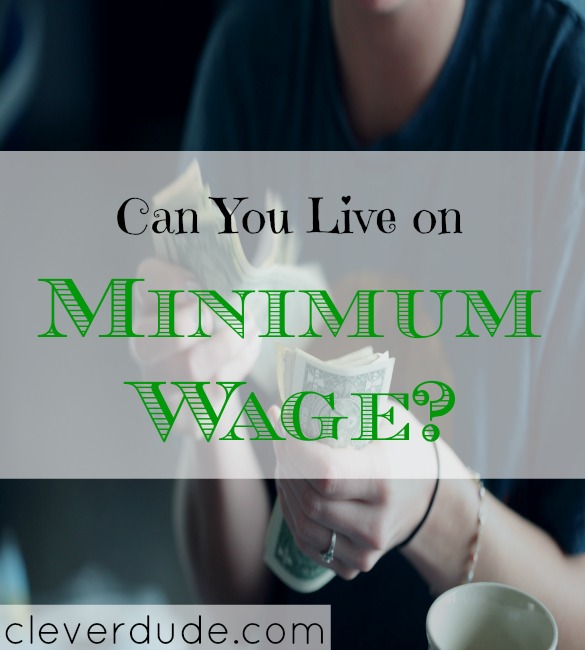 Let’s do some analysis together, using the example of a single person making the federal minimum wage.  Let’s set the parameters of our experiment.

What Is The Minimum Wage?

The federal minimum wage is currently $7.25, however many states have set their own minimum wage that is higher. You can see the minimum wage by a state on the IRS’s website. A person who has a job that is subject to both federal and state minimum wage laws, they receive the higher amount.

According to the United States Department of Labor Bureau of Labor Statics, for the year 2016 the average single person spent the following percentages on major life expenses:

The percentages of these major categories only add up to 81.2%. The remaining 18.8% would be for things such as clothing and entertainment.

*Note: State taxes are variable and not included in this example.

Using the percentages above, here’s how our minimum wage worker’s monthly budget looks:

Analysis: Can You Live Off Minimum Wage?

The problems with the minimum wage budget as shown are obvious. The food budget is woefully low even for one person, and the housing budget would likely require living in a roommate situation. Even then, housing plus utilities for $411 is going to be extremely if not impossible to find. Our minimum wage worker would likely have to make some sacrifices such as forego life insurance or any retirement savings to boost other parts of the budget. There wouldn’t really be much if any, funds left for entertainment to enjoy life, or save for an emergency fund or retirement. Our minimum wage worker would likely be looking for a second job to make ends meet.

People have strong opinions about the idea behind what minimum wage is supposed to accomplish, and what it should be set at. What is clear is it would be extremely difficult if not impossible to live off the federal minimum wage.

What do you think, Clever Friends, do you know anyone living off of the federal minimum wage? How about their state’s minimum wage?