Budget vs Spending Plan and Why I Need Both 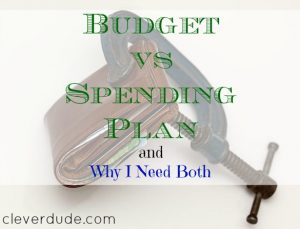 My wife and I agreed to let our son travel with friends ninety minutes to a major metropolitan area to go to his first concert. A few days later, after I found out he had purchased his ticket, I asked if he was setting aside money for the things heâ€™ll need on concert night. He wouldnâ€™t get paid again before the concert and I wanted to make sure he was thinking ahead. The look on his face in response to my question told me he wasnâ€™t.

I explained to him that even though he had purchased his ticket, there would be other things he would need money for that night:

It was time I introduced him to what I call a spending plan.   There are countless interpretations of what a budget or a spending plan is. Here are my definitions:

My budget tracks income against itemized required bills for a budget cycle. For each two week budget cycle I create a worksheet that shows our income, as well as every bill that has to be paid as well as life necessities such as food and gasoline. The money spent here is non-negotiable. Whatâ€™s left over is discretionary spending.

Once we have everything required to meet our financial obligations taken care of, itâ€™s time to discuss what weâ€™re going to use with our discretionary funds. We have spending plan meetings once a week to discuss what activities we have going on, if thereâ€™s anything we want to purchase, or if we want to have a date night.

My wife and I have been breaking our finances into two pieces for a couple of years now. By doing so, we ensure first and foremost the bills get paid. Through our spending plan discussions we force ourselves to really think about how we want to spend our discretionary funds from week to week. This process results in having almost every dollar accounted for, keeping our finances 100% on track.

Do you account for every dollar of your income? How often do you have financial discussions with your significant other?