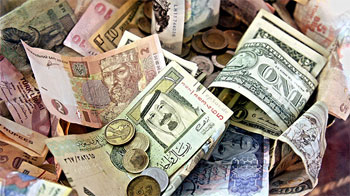 An uncomfortable week for the US dollar saw it lose a cent to sterling one and a quarter cents to the euro. Investors remain preoccupied with the Federal Reserve’s focus on US economic performance. They believe “good” numbers bring forward the end of the Fed’s monetary stimulus and are a reason to buy the dollar while “bad” numbers set back the date and provoke selling. Last week investors found more bad numbers than good.

The euro strengthened by a third of a cent against sterling for no particular reason. Both moved higher against the US dollar, the pound by a cent and the euro by a cent and a quarter. Moneycorp suggested that any advantage gained by the euro came from better-than-expected purchasing managers’ index readings from Euroland, which showed growing activity in the manufacturing sector and in the commercial economy overall.

The Canadian dollar did not vary by more than a cent either way against sterling. Both the Loonie and the pound went up by approximately a cent against the US dollar. Canada maintained a low profile. The only data related to retail sales, which increased by an impressive and unexpected 1.9% in May. The news was positive for the Loonie, handing it a half-cent advantage that it held onto for most of the week.

A difficult week for the Aussie left it at the back end of the field. It lost half a cent to the pound and the US dollar. Economic data showed Australian inflation slowing to 2.4% and China’s manufacturing activity shrinking. The inflation number was bad for the Aussie because it made lower interest rates more likely. The slowdown in China was bad because it implied reduced demand for Australian mineral and energy exports.

The NZ dollar had a good week, strengthening by a cent and a half against the US dollar and by two and a half cents against the pound. It was helped by the NZ balance of trade and secondly by the Reserve Bank of New Zealand. According to Moneycorp, the trade figures showed falling imports and a wider surplus. The RBNZ implied in its monthly statement that the next move for Kiwi interest rates would be upwards.