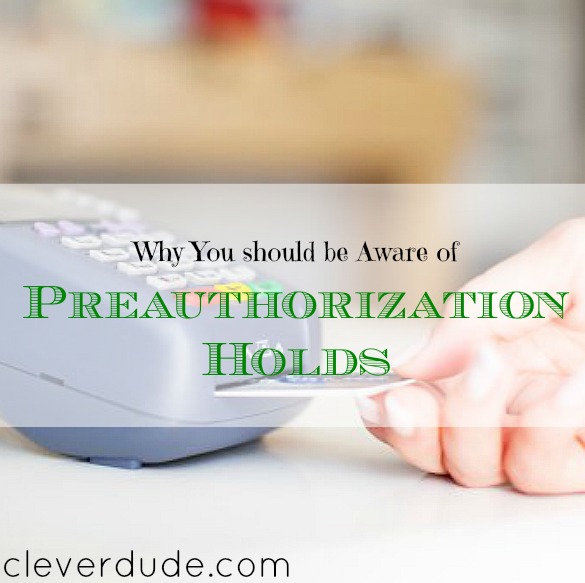 I received an email stating my son’s checking account balance was below zero. Reviewing his account activity, I knew exactly what had occurred. We needed to have a conversation about preauthorization holds vs a transaction actually posting to his account.

What Is A Debit Card Preauthorization Hold?

When a debit card is used in a credit transaction, if you don’t enter your PIN, the merchant usually sends the purchase amount for preauthorization and removed from the available balance of your account. After one, or in some cases two business days, the hold is released and the full amount of your bill is then posted to your account.

Example Of How Preauthorization Holds Work

Think of the last time you ate at a restaurant and paid using a debit card. The server brought your bill, you inserted your debit card into the check holder and handed it back to the server. The server swiped your card and initiated a transaction for the amount of your purchase. The preauthorization occurs is at that instant. The bill is then returned to you, a tip amount is filled in, and you leave. Later, someone at the restaurant has to initiate a new transaction for the full amount.

My subsequent conversation with my son via text message confirmed my suspicion. On his way back to college after a weekend at home, he stopped at the gas station, checked his account balance and put in as much gas as he could without overdrawing his account. However, his account balance at the time only showed a preauthorization hold for pizza delivery from earlier in the weekend. The hold amount was for $16 and change, however, they had left a $5 tip which was not reflected in the initial charge to his account. After a few days, the pre-authorization hold dropped off, and the full purchase amount ($16 + $5 tip) posted to his account. This resulted in an overdraft of his account by about $4.

Avoiding Overdrafts Due To Preauthorization Holds

There are two good techniques to use here:

Successfully managing your finances requires a lot of skills, including knowing exactly how much money you actually have. Preauthorization holds are just one more thing people need to be aware of and watch out for when making spending decisions.

How about you, Clever Friends, have you ever miscalculated how much money you have in your account because of a preauthorization hold?