Am I rich? Do you think you’re rich? 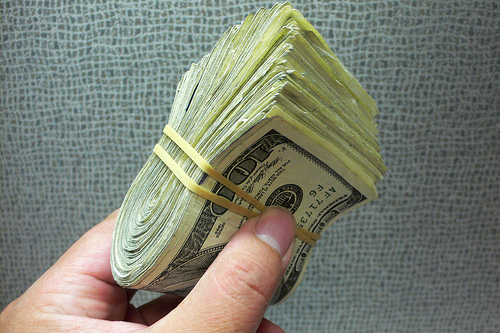 J. Money at Budgets are Sexy wonders what salary it would take before he thought he was rich. For him, $150,000 per year would make him feel like Mr. J Moneybags, but I have a different perspective.

When I was young (like 20 years ago), six figures sounded like a fortune. I think I knew one person who made that much (a friend’s dad), and he was the CEO of a bank (although he in no way flaunted his wealth so I’m only guessing). Even when I graduated college earlier this decade, I still thought it would take me forever to make six figures, but I had the wrong perpective.

Perception of Wealth is Relative

I was looking at a $100,000 from the perspective of 1) a “lower middle class” child and 2) a debt-poor college graduate. And both perspectives were from mid-size Pennsylvania towns.

When I graduated, I moved to the Washington D.C. area, but my perspective still stayed in central Pennsylvania at first. Then, as I began to see my earning potential in a metropolitan area, I no longer saw $100,000 as “rich”. I had many more people around me that I knew made very close to, or over, six figures a year, but here’s the kicker…

They weren’t living the lives of rich people, and least the rich people I saw on TV.  It didn’t make sense to me that these people were rich to my young eyes, but now I see they’re just like me. Why was that?

Cost of living! These coworkers and friends weren’t paying the $500-$1000 mortgages from my hometown. Instead, they were paying $2,000-$4,000 per month for the same size house. And while most in my hometown were content with owning one or two used cars per household, people in D.C. seemed to need 2-3 new cars per home. It was a richer lifestyle, but I still wouldn’t call it rich.

So a six figure salary no longer appeared like very much money to me in my new big city. It wasn’t the average salary for a single worker, but six figures in combined salary for a couple in our area is pretty common.

Combined Income is Screwing with My Perception

When I was young, I never thought I would be married to a working woman. Heck, when I was 10 I thought girls were evil and would eat my ears off. Puberty corrected those thoughts about girls, but I still never factored in a wife’s salary because I never seriously thought about it. I was too focused on getting a job to think of someone else’s career.

But now that I’m married and have been in the workforce for nearly a decade, I’ve become a pretty decent wage earner, and I also have Stacie’s income to add to the total. With that said, I will state that we are in the six figure range with our combined income. But knowing what our money does for us, I wouldn’t consider ourselves rich. We can pay our mortgage easily, and we have 2 cars (2-3 years old), but we’re not living anywhere near the lifestyle I thought rich people would live. Heck, we don’t even have a flat-screen TV! Boooo!

For J. Money, $150k-$200k is rich. I guess if I alone made $200k per year, I’d consider myself rich, or close to it, because it seems such a considerable distance from where I am in my career. I figure that wealth is when you’re earning what you couldn’t even imagine right now. I can’t picture myself earning $200,000 per year all by myself, but perhaps I’ve opened a path to riches with my side income (this site and a few others). Maybe I’ll make it to $200,000 per year in less time than I would have thought, but I think I need to own my own consulting business to get there.

So what’s your definition of “rich”? We know John McCain thinks you need to make more than $3,000,000 to be considered rich, but is that a bit high? Let me know what you think.