A Lesson In Value: Loving the Idea More Than The Reality 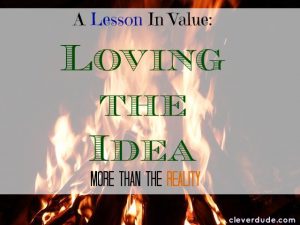 I found myself at a big box hardware store over the weekend, looking at materials to build a fire pit in my backyard. Others in the neighborhood have semi-permanent fire pits built with rocks, patio blocks, and even concrete. They look really cool, and we’ve enjoyed sitting around a fire with neighbors roasting marshmallows and shooting the breeze on numerous occasions. A few years ago we even purchased a metal fire pit that we use on our patio every now and then.

We thought we wanted to drop some cash on building a fire pit in our backyard. Then we saw how much it would cost.

At first, the cost seemed fairly reasonable. We just needed a metal fire ring, and some patio blocks to put around it. It would look nice, and the cost was about $170. Then we got the idea of  constructing a paver stone circle around for chairs to sit on. That added another $350 to the cost. The employee then told us that they don’t cut the blocks for us, so if we wanted a circle, we would need to rent a wet saw and cut them ourselves.

The cost, and the use of an unfamiliar power tool had us re-evaluating whether a fire pit was really a good use of our money.

My wife and I tried to think of how many fires we had last year. We both remembered two.

One of the reasons we don’t have fires very often is because my wife likes to close all the house windows to prevent smoke from going into the house. That means that regardless of how nice it is outside, we can’t sleep with the windows open because the fire will usually smoulder over night.

The Worry Of Fire

My wife never sleeps well the nights we have a fire. Despite dousing the fire with water, she worries about it flaring up and spreading, eventually leading to our home catching fire.

We realized we were prepared to drop over $500, and a ton of do it yourself effort to build a fire pit in our backyard that we would seldom use. We had fallen into infatuation with the idea of having a fire pit, but the reality was we are not fire pit kind of people.

A fire pit would not be a good use of our money. 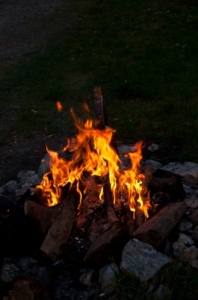 Image courtesy of franky242 at FreeDigitalPhotos.net

We walked out of the hardware store sincerely believing we had avoided wasting a fairly large chunk of money. We all do this from time to time. At a specific moment, we love the idea of having or doing something, but when we actually execute on it the result is very different.

Have you ever bought something because you simply like the idea of having it, only to find out it was a financial mistake? How much did it cost you?