You’ve heard me complain about the cost of owning a pool before. Well, the problem of being a homeowner is that when something breaks, you’re on the hook to fix it. Such was the case with our pool recently when we asked a couple contractors to come over and give us an estimate to replace some caulking around the pool and above the waterline tiles.

It turned out to be much more work than just doing some caulking. The first contractor who came over did some “tap tests” along the brick coping (the darker brick that frames our pool in the photo below) and found that at least half of the coping made a hollow sound when tapped. That meant the “mud” compound that secured the brick to the top of the pool wall had eroded away and now water was getting between the brick and pool cement and could cause significant damage, if it hadn’t already. The second contractor also found the same problem.

I’ll shorten the story to say that if we replaced the brick coping, we would also need to replace the tile (attached to the top of the pool wall, just under the brick) due to the way they remove the brick. We would also need to drain the entire pool (covered in “Save Money on Water if You Have A Pool“), which meant filling it back up again. Oh, and they also found that our top step was collapsing from within, so it would need to be cut out, re-poured and re-plastered. Total negotiated cost: $7,000. And that was down from over $8,500!

Ok, so we needed to make some home repairs. While it could have waited, we chose to do the work now since we have the money rather than wait and something bad and unexpected to happen. If that were to occur, then what if we had to sell the house and then the pool problem was found then (or had gotten much worse), we’d be in trouble. But luckily we had the money in our home repair bank account and it didn’t impact our budget (except to continue replenishing the account).

The problem with home repairs

So what’s the big deal? Why did I title the article “$7.000 we’ll never get back”? Well, look at the following photo and tell me if you see anything wrong with the pool:

No? Can’t find anything? Well, outside of the worn out caulk between the brick and the cement patio, which you can only see in person and by looking closely, the average home buyer wouldn’t notice anything wrong with our pool. And that’s the problem with home repairs: Often you put tons of money into a repair that brings no added value to the home. At most, the repair might save you from losing money, but it won’t cause people to say “wow, I’m willing to pay $7,000 more for this house because there’s now a barrier of sealed mud between the brick and pool wall”. We won’t even see that money on a home appraisal when we need to refinance our mortgage. It’s not like a renovated bathroom or kitchen where you can see a marked improvement. It’s hidden away somewhere you’ll never, ever see, and only a seasoned home inspector will find it if it’s gone bad.

Now just to show you a photo of the mess during the repair, which they cleaned up after each day: 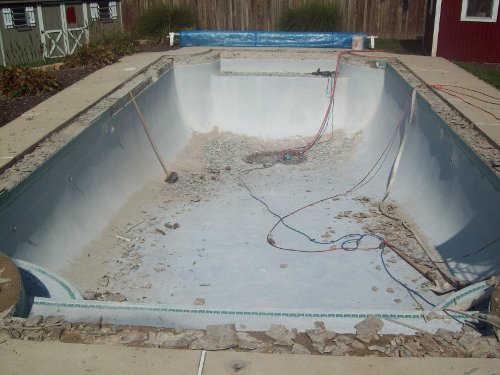 The photo above is after they tore out all the old tile and brick. Notice the first step (bottom of the photo). That’s the one that was torn out and replaced after this photo was taken. The amazing thing was an entire crew of about 10 guys worked all day to tear out all the old stuff, while only 2 guys worked for a day to put in the new brick and tile. See the photo below for the results: 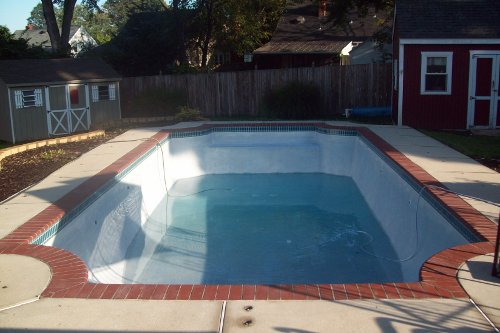 We’re still filling the pool in that photo, and the caulking around the coping wasn’t done yet, but that’s basically what changed. Would you, as a buyer, notice anything other than the color change between the first photo and this one? No.

Oh, we also chose this time to repaint our two sheds to match the red brick. In the photos above, the shed on the right was already painted when I took the pics, but here’s some of the final results below (photos taken after we closed the pool for the season…cause that’s how long it took me to finish painting them): 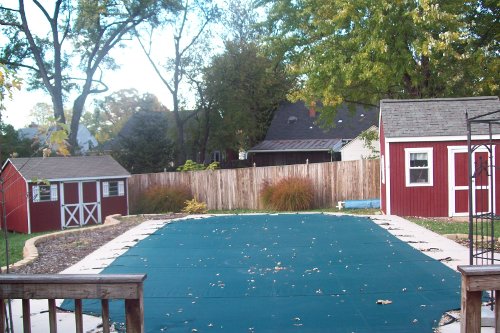 Next up in the spring will be to replace the top row of the retaining walls (partially visible in the photo above) with a red capstone. Then we’ll plant some bushes, etc. with other colors of the rainbow so it’s not too much red back there! 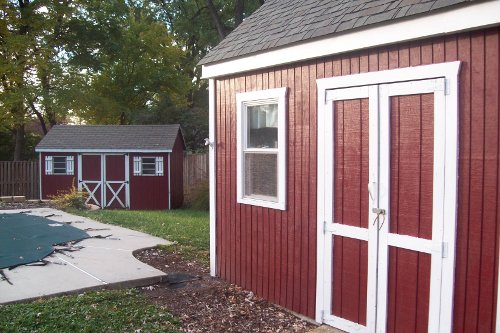 So that’s where a lot of my time and money went in September and October. We painted by hand and brush rather than a paint sprayer, and I’m very please with the results. The funny part is we’ll get far more compliments from the $100 paint job than the $7,000 pool repair.