3 Steps To Saving Money Making Your Own Buffalo Wings 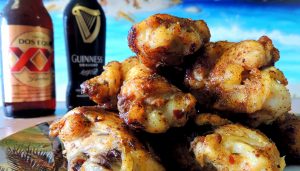 Football season is here. For many, including myself, this time of year also means weekly gatherings of friends and family to eat delicious finger food while rooting on their favorite team. One of the most popular foods at football gatherings is chicken wings. They’re delicious, and an infinite number of sauces exist to add flavor. These wonderful morsels of heaven can be purchased pre-made from a deli, a restaurant, a freezer section, or online but if you want to save some money you can make them yourself in 3 easy steps.

Purchase a package of chicken wings from the grocery store. As you open the package you’ll noticed they look nothing the chicken wings you get from a restaurant. Using a sharp knife, cut each wing at the two joints and throw away the pointy tip. The two remaining pieces will look like the â€œwingâ€ and â€œdrumstickâ€ that you know and love from restaurant wings.

The wings can be cooked several different ways, including:

My preference is on my charcoal grill because I can throw a few wood chips on the coals to add a litle bit of smoky flavor.

One reason to make your own wings is convenience, as having to get takeout from a specialty wing place isn’t easy on football days. Another is to save some money. Here’s a price comparison between making my own wings, and getting an order from a nationally known wing restaurant:

Delicious buffalo wings can be made at home for less than half the cost!

Next time your hosting or attending a football gathering with friends, be the hit of the party, and your finances by making your own buffalo wings!