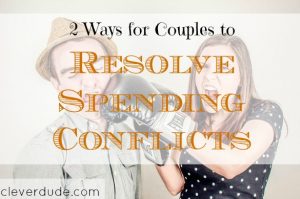 At the beginning of each weekend, my wife and I sit down to discuss our spending plan for the weekend. We talk about any plans we already have on the calendar, other things we’d like to do, and how much they cost. Sometimes we have different opinions as to what we should spend our money on that weekend. Normally the art of compromise is applied and we come to an agreement. On rare occasions we both dig in our heals, neither of us wanting to give up our idea in favor of the other.

Such a scenario arose last weekend during our pre-weekend spending discussion. I could tell my running shoes had reached the end of life by the aches in my legs. My wife, on the other hand really wanted to use the bulk of our weekend money for a facial and some skin care products that were running low. Both valid uses of our discretionary funds, but both purchases would not fit within our weekend spending budget. We were both adamant about our want being a higher priority.

Situations such as this require a plan of action to break the stalemate.

We had two ways we could handle this problem.

Many couples allocate a small sum of money to each person to be used however they please. By doing this, we could each save up our own money to be used on larger items such as shoes or skin care products when they are needed. The rest of the discretionary funds are a common bucket to be used for activities together.

I know quite a few people that do this, and it works well for them. However, there is still the potential that couples may disagree on how to spend their â€œtogetherâ€ money.

In basketball, there’s a concept of a possession arrow. When a loose ball occurs, a member of both teams my go after the ball, grabbing it simultaneously. Each team claims possession of the ball. At that point the referee blows the whistle and possession of the ball is given to whomever the arrow (usually sitting on the scorer’s table) is pointing at. It’s a tie breaker. Each time the tie breaker is applied, the arrow is toggled to the opposite team.

The same concept can be applied to couple’s finances. Whenever there’s a stalemate as to how to spend funds, whomever owns the tie breaker gets their way. The possession arrow is then toggled to the opposite person in the couple.

In my real life example, let’s say my wife owned the tie breaker. She would get her skin care products, and my shoes would have to wait until the next weekend. However, two months down the road, if we had a similar situation, my proposed expenditure would be the priority.

Couples are usually able to work out a compromise on their own. However, having a process in place that helps to resolve the occasional deadlock helps to keep not only the finances, but also the relationship running smoothly.

How do you handle spending conflicts with your significant other?