Would You Say No To A Free Tablet? 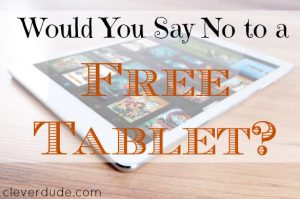 I’m not a huge fan of cell phone companies. They’ve seemingly been rolling out new pricing structures more often than the average teenager changes socks. They come up with fancy names, and lots of banners, balloons and whistles. They can package it anyway they want but it boils down to various permutations of paying for the phone through explicitly stated phone payments, or through higher monthly fees while under a contract.

I don’t trust them.

I won’t go as far as to say that a cell phone is a necessity, but they certainly do have their place in today’s technology laden civilization. I will have to deal with the cell phone companies whether I like it or not, but I’ll always have my eyes open watching, scrutinizing, and analyzing the offers they put forth. Which is exactly what I did the day my wife upgraded her phone.

The plan choices available from AT&T were standard for what major carriers are offering right now. Get a discount on the phone up front and enter a two year contract with a higher monthly line fee, OR pay full price for the phone through monthly payments with a lower per month line fee. But then, things got interesting.

With the activation of her new phone, we were eligible for a free LG 7 tablet.

While my wife did some paperwork, I took a look at the display model. It was an entry level Android based tablet with 16GB of storage, front and rear cameras, a 7inch screen and retailed for $249. There was a catch with the free tablet, of course. We had to enter an 2 year activation agreement. To add the tablet to our data plan, we would pay $10 per month for 24 months totalling $240. AT&T is obviously out to make money, and I could come up with a couple of reasons why they would give us a free tablet, with the activation agreement not even covering the retail cost of the device:

I smiled, as I mentally dismissed both of these strategies:

We accepted the free tablet, along with the 2 year activation plan. I never thought of myself as a tablet guy, but I have to admit that being able to access the internet, email, and social media without the bulk of a laptop and a screen larger than my cell phone is extremely convenient. I’ve started to carry the tablet with me everywhere I go. Last night I went to an informational meeting for my son, regarding earning college credits while still in high school. They referenced a website which caused me to immediately pull out my brand new tablet and take a closer look online.

I thought to myself how convenient my new tablet was. Now, If only the screen was a little bigger…. 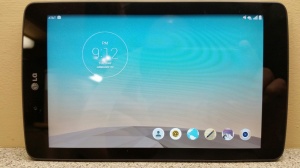