Would You Boycott a Business for Bad Customer Service? 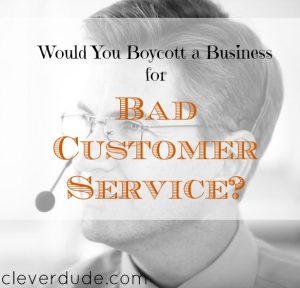 I love Subway, but there’s one location that I won’t visit again, ever.

My wife had ordered a Subway party sub for my birthday. When my wife picked it up, she immediately noticed that it was made with the wrong type of bread, and pointed it out to the manager. He apologized and gave her a certificate for another party sub to be used in the future. Since the bread is baked a day ahead of time, there wasn’t anything they could do for us that day.

When we redeemed our free party sub certificate, that same manager even thew in a cookie platter free of charge to make sure we were taken care of. We were very impressed by the manager, and his customer service skills.

About a month later, we ordered a party sub again from the same location for the Super Bowl. When I unwrapped the sub at home I noticed that even though I had ordered two different varies of sandwich, they had made the entire sub the same. I called the store, and again I was told they were sorry that nothing could be done on that day, but to call the next day and the manager would take care of us.

Being an avid viewer of Judge Judy, I knew that I had better document the situation.

I removed the top layer of bread from a few pieces and took a picture with my cell phone. The picture clearly showed the sub was all the same kind as pepperoni was exposed across the entire sub sandwich.

I left a message for the manager the next day, but he did not get back for me for a few days. When he did, he questioned my truthfulness. He stated that the sandwich artist was positive she made the sandwich correctly and believed her. I happened to mention the picture I took.

He was suddenly very interested, and asked that I email it to him.

I did as he had requested and waited to hear back, but I never did. I stopped in the restaurant and called a few times, but he was never available. I sent a few more emails, but he never responded.

Due to his lack of response, I decided to boycott that particular Subway.

My boycott has been in effect for over three years, and I will never go back. It’s unfortunate because this Subway is at a very convenient location, being very close to both my home as well as work. However, I happily drive a little further each time I want Subway to avoid that location. I was accused of being a liar, and even with clear evidence to the contrary, they still were not interested in correcting their mistake.

Therefore I am no longer interested in giving them my business.

Have you ever boycotted a business? How long did you boycott, and would you ever go back?