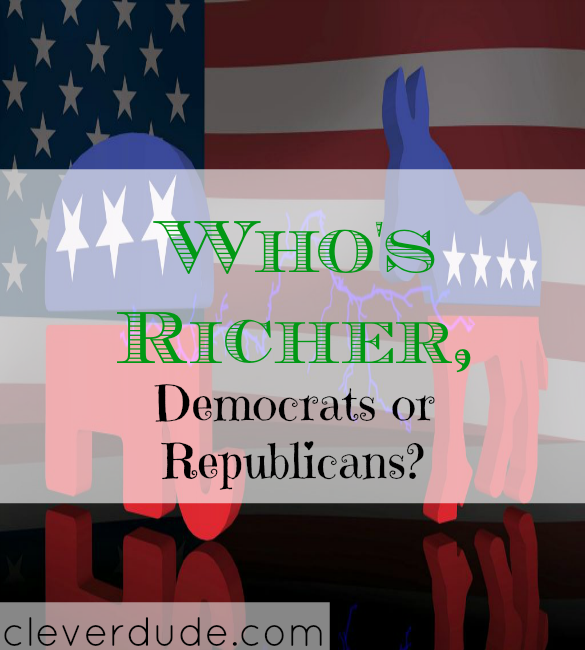 Who’s richer, democrats or republicans? It’s a common question that usually results in a lot of finger-pointing. Democrats accuse Republicans of catering to the 1%, insinuating that the GOP is made up of mostly wealthy people. Republicans point the finger the other way to defend their position. The truth in some ways is common sense while surprising in others.

One way to look at the question of who is richer between republicans and democrats is to examine the people representing us in Congress.

The story is a little different in the House Of Representatives, where the average net worth of Democrats is $5.7 million opposed to $7.6 million for Republican representatives.

While the people representing us are on average very wealthy, the same is obviously not true for the general voting public.

Democrats have a huge voter base advantage with low-income earners. 63% of voters with an income of $15,000 or less identify as a Democrat. As income increases, that advantage shrinks. It breaks even around $50,000 which is coincidentally very near the median income of the United States. As income grows, so does support for the Republican party. Only 36% voters with an income above $200,000 identify as Democrat.

The people who represent us in Congress are extremely wealthy. While this is interesting, it’s an extremely small sample size. It doesn’t answer the question of who’s richer, democrats or republicans as it pertains to the general public.

The income demographic of voters does, however.  The data show an increasing tendency to identify as Republican as income goes up. This really makes sense, as people who make more would be more likely to favor policies that allow them to keep their wealth. On the opposite end of the spectrum, as income decreases, voters would tend to identify with the party that is more supportive of income redistribution and social welfare programs.

How about you, Clever Friends, do you fit the stereotype, or do you go against the grain?