When The Story is Better Than The Experience 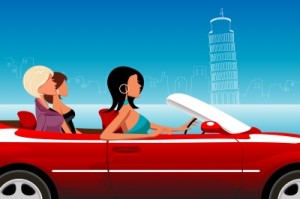 Some friends and I were discussing our favorite vacations recently.  I was recounting the trip my wife and I took to Hawaii, and how we rented a black Mustang GT convertible for a single day and cruised around the island of Kauai.

I could see the thoughts racing through my friendsâ€™ minds.  Visions of a muscle car squealing it tires around tight corners as we raced through the countryside of island paradise with the wind blowing through our hair, and the sun shining down on our backs.  Itâ€™s exactly how I envisioned it as well.

Except thatâ€™s not at all what happened.

We did spurge and spend extra money to rent not only a sports car, but a convertible sports car.   I honestly donâ€™t remember how much it was, but I remember that it was more than double the cost of getting a compact car.  The goal was to have transportation to travel to the east side of the island where we were going to snorkel, then along the south side of the island for shopping where itâ€™s more heavily populated.  But how often are we in Kauai?  We HAVE to get the convertible, right?  I remember thinking what a great story it would make.

It definitively got us where we wanted to go, but the rest of the vision didnâ€™t go as planned.  It was excruciatingly hot that day, so quite frankly we had the top up and AC on most of the time.   As far as speeding through the countryside in a sports car, thereâ€™s something we learned that day about the highway structure of Kauai.  Thereâ€™s one main road that essentially follows the perimeter of the island, as the middle is mostly trees and an inactive volcano.  The speed limit on this road is painfully slow, something like 35mph.

But I rarely ever tell that part of the story.

The fact of the matter is, even if the weather had been perfect and the roads more agreeable to sports car use, the Mustang Convertible really wouldnâ€™t have added anything to the experience.  The most memorable parts of the day were seeing a whole school of tropical fish while snorkeling in chest deep water, and the amazing seafood restaurant we found to eat at that evening.

But still, I mention how we rented a convertible Mustang GT (gotta remember the GT part) every time.

Have you ever done something that the idea of it turned out better than the actual experience?  Did you pay extra for it?