When Should Teens Stop Receiving Allowance? 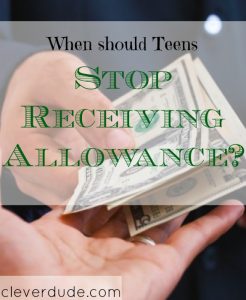 My son has been earning allowance since before he was ten years old. His payrate has been $1 per week for each year of age. Every year on his birthday he recieved a $1 a week raise, but he also has responsibilities added to his list. With the exception of extra payments for mowing our lawn during the summer, his allowance has been his only source of income.

A few months ago his income increased significantly as he got his first part-time job. He’s still expected to perform his responsibilities around the house, and in turn he has continued to earn allowance. But as I see his rather significant paychecks deposited in his checking account every other Friday, I’ve been asking myself a question.

Should a teenager with a part-time job continue to earn allowance?

Allowance was meant to have two purposes:

My son continues to learn the same lessons, only on a bigger scale, with his part-time job.

The hard part is telling him he’s no longer going to be paid for work that he’s received compensation for doing for years. But at the age of 16 he should be able to understand and accept the transition.

What do you think Clever Friends? When should teens stop earning allowance?