When Kids Disobey: Punishment, or Dock Their Allowance? 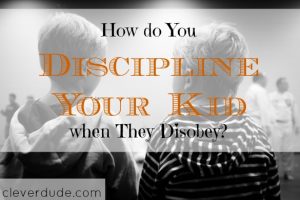 When my son got his first part time job earlier this year, I toyed with discontinuing his weekly allowance. I never acted on that impulse, so my son has continued to earn a sum of money each week for completing assigned responsibilities. One of those responsibilities is to put his laundry away. Laundry in our home is sorted by color and washed together. Once it’s been dried, it’s folded and put into baskets. My wife and I take ours to our room, our son’s is set on his bed.

Unfortunately, he’s developed a bit of a bad habit. There are times that his laundry basket will be moved to the floor and sit there for days. One time it was still sitting there when the next round of laundry was done and ready to be delivered. It has become increasingly frustrating as the length of time, and the number of reminders needed to put away his laundry have both increased.

One night this week, I hit my breaking point. His basket had again been sitting there for days, and I had already taken it back to the laundry room once for another delivery. I told him early in the evening it had to be done before bed. When he came to say good night to me, I reminded him to put his laundry away before he went to bed. Fifteen minutes later I slowly opened his door and saw that the basket was still sitting on the floor.

Two thoughts went across my mind:

Since this blog mostly covers topics relating to money and finances,  you might think that I choose #1. If you did, you made the wrong choice. My reasoning being this was not a time to teach him a lesson about not getting paid if you don’t do the work. This was an opportunity to teach the lesson that disregarding instructions from an authority figure has consequences. On came the light, off came the covers and the laundry basket was plopped right next to him on his bed.

â€œI told you to put your laundry away and THEN go to bed.â€