What Would You Do? The Increasing Hotel Room Rate Edition 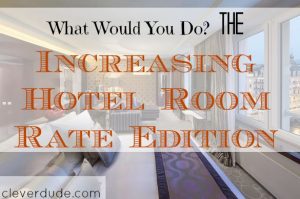 I had an experience last week that I want to share and have you give me your thoughts. I was surprised at what happened, but I was even more surprised to watch my wife, whoâ€™s always looking to get the best price on everything, willingly pay more for a hotel room.

We were making late hotel reservations for an event out of town, wanting to secure a reservation at the same hotel some friends were staying at. The reservation assistant initially said that they were completely booked, but then admitted that they did have two non-standard rooms available. By non-standard she meant that they were â€œfantasy suitesâ€ in a 1950â€™s theme. The rooms had an actual â€™57 or â€™59 Chevy in them, converted into a bed.

The weekend rate was $159, which was the same price as other hotels in the same vicinity. My wife told them we were coming for a charity bike rally hosted by my brother-in-lawâ€™s Army unit and asked if we could get a military discount. The receptionist typed away for a minute before she quoted us a new price of $89.

We booked the room immediately, and cancelled another reservation we had made at a different hotel.

A few hours later, the phone rang. It was the reservation assistant calling us back to inform us that after talking to a manager, it turns out they wouldnâ€™t be able to give us a discount on that room. The price was going to be $159 if we were still interested. I was sure my wife was about to not so calmly explain that we had already cancelled our previous reservation because of the lower price. Instead, she said this:

â€œI understand. To tell you the truth, I was a little skeptical of the $89 rate you quoted earlier. That was an unbelievable deal. Weâ€™ll take the room.â€

This is the woman who got us a discount on a room in Chicago because she disputed the quality of the view that cost us extra. This was the same person that asked the manager at Bed, Bath and Beyond if we could have a discount on our patio furniture. Yes, this is also the savvy shopper that got 10% off our liquor bill just by asking.

I actually disagreed with her. Once a price is quoted, that should be the maximum the customer pays. If they quoted the wrong price, well, so sad for them. Thatâ€™s the way business usually works.  The interesting thing here was that the two non-standard rooms were the only two left in the hotel. Obviously they were having trouble filling them for that night. On the other hand, the other hotels in the area were all filling up due to various events in the city.

We had a fantastic time at the charity bike rally, and enjoyed a super cool room. But it would have been even cooler if it would have cost $60 less. 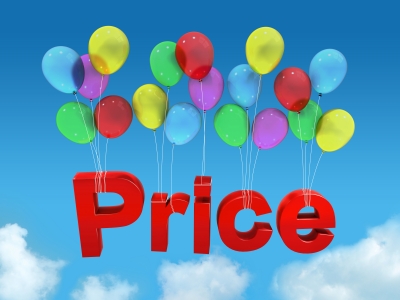 Image courtesy of Kittisak at FreeDigitalPhotos.net

What do you think, Clever Friends? Should we have let the Hotel get away with upping the price AFTER we had made the reservation?