What Would You Do? The Disliked Christmas Gift 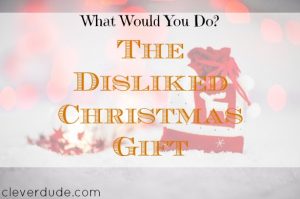 My son is extremely difficult when it comes to finding clothes that he likes. I can’t even put a number on the pairs of jeans he approved just to complete shopping trip, never to be worn again. Trying to buy anything for him without having him along to try it on AND be in the right mood to tell us the truth about whether he’ll wear it again is a lost cause. So, I’m sure you can identify with my skepticism when I saw the majority of his Christmas list was clothes.

Buying him clothes within our own community and keeping the receipts for a potential return is one thing, but telling his grandmother who lives several hours away he wanted a new pull over sweatshirt hoodie is quite another. To be honest, my mom tried to cover all her bases by asking me to physically measure his current favorite hoodie, and bringing not one, but two potential pullovers for him to choose from. Unfortunately, neither of them fit exactly what he wanted. One had logos on the sleeves, and the other had a big stiff official emblem on the front that he found uncomfortable.

What he wanted was something a little more plain.

My mother described a third sweatshirt that she had seen, at which my son nodded his head and said that one sounded perfect. His grandmother agreed to return the two sweatshirts she had purchased and send him the more plain one.

I advised my mother against that plan.

Knowing how picky my son is about his clothes, I reminded her that there was no guarantee that he would like the third sweatshirt either. If she sent it through the mail, and he didn’t like it, we would be stuck with a hoodie that we’d either have to send back to her, or wait until we visited them again to return it. Of course at that point there may be a chance that they wouldn’t allow us to return it.

I suggested that she give him money that he could use to go shopping for a hoodie locally. Being a little old school, she didn’t like that idea. She wanted to have been the one to pick out his present and give it to him. After my parents returned home, she sent an email stating the two original sweatshirts had been returned, the third one purchased and dropped in the mail.

I hope the hoodie is exactly what my son wants. But if it isn’t, there will be at minimum two postage charges wasted. At worst, it will be another present hung on a hanger never to be worn. Money wasted.

How about you, Clever Friends, did you receive a present this holiday season that you know you’ll never use? How would you handle this situation?