What Is Out Of State Tuition and How Can You Avoid Paying It? 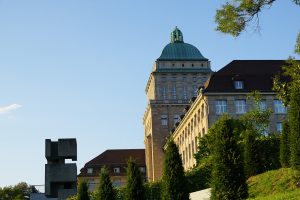 My son will be starting his senior year of high school in just a little more than a month. The potential of his future is beginning to unfold before him. After visiting some college campuses, he’s weighing his options to determine where he will continue his education. One very important aspect to consider when it comes to his college education is cost. I’m a firm believer that he he should be fully aware of the cost of his education, so we’ve been looking together at the data sheet provided by each college breaking down the costs of their services. He’s asked many good questions, including asking the what the difference is between in state and out of state tuition.

Public universities are partially funded through taxes paid by the residents of the state. While there may be some logic supporting doing differently, it is generally unpopular politically for the government to subsidize the education of students that do not live in the state. Therefore, public universities typically offer cheaper tuition (in state tuition) for those that reside in the same state as the university compared to students that live in a different state (out of state tuition).

However, many students have dreams of going to college in a far away place. Sometimes these are simply whimsical fantasies, other times there are sound reasons why someone may want to go to a college outside their home state. If this is the case, there are a few ways to get around paying out of state tuition rates:

Some states have negotiated agreements n which students are offered a discounted tuition rate when attending a public university in a state they do not permanently reside. Sometimes students are charged in state tuition, sometimes it is somewhere between the in state and out of state rates. When considering an out of state university, it is a good idea to find out which states your home state have reciprocity agreements with.

Requirements to be considered a residency vary from state to state, but generally to be considered a resident, a person must live in a state for 12 months and prove they plan to reside in the state. They may need to provide proof in the form of a driver’s license, utility bill, or vehicle registration. Many students would not be able to do this for their first year of college, but by taking the correct steps during that first year to gain residency thousands of dollars could be saved over the remainder of their college experience.

Some universities will grant an in state tuition scholarship based on academic merit. If a student qualifies, they would be charged in state tuition regardless in what state they permanently reside.

A college education is an expensive endeavor. Understanding at what rate your tuition will be calculated, and how to select a school to minimize that rate can make a huge difference in the overall cost of your degree.

How about you Clever Friends, did you go to a public university? Did you stay in your home state, or did you pay out of state tuition rates?