What Happens When Couples Disagree About How To Spend Their Money? 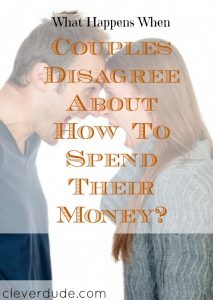 My wife and I reviewed our budget before the weekend to get on the same page with bills that were to be paid and how much we had left in discretionary funds. After crunching the numbers I felt great about where we were at. Bills paid, money in savings, and a good roll available to enjoy life. We didn’t have anything going on, so I envisioned a low key weekend maybe throwing a brisket on the smoker, enjoying a movie with the family and watching football all day on Sunday. It wouldn’t cost much, and we could put the extra into boosting our emergency fund.

Apparently my wife had different ideas.

She mentioned she had a few things in mind that she wanted to do with our money:

The sum of which would exceed the amount of money we had available for the weekend. It took me by surprise when she stated that she been thinking of these items for awhile, but was trying to make them last as long as possible.

To me this was a breakdown in communication between my wife and I. During each budget discussion we ask ourselves if there are any upcoming expenses that we should plan for and these were never mentioned. While I admire her for trying to hold off as long as possible for these expenditures, it would have been better if she would have mentioned these items during our budget discussions so we could have discussed and planned for them. Instead, now we were faced with expenses that my wife wanted immediately.  While none of them are absolute life necessities, they are items that make life more enjoyable for both of us.

We decided to take some  actions as a result of this learning experience:

In this specific instance we had the ability to fulfil most of my wife’s wants (the clothes had to wait another week or two) because we didn’t have any other activities or items in our weekly spending plan. We would have had to have a more serious discussion and a potential argument could have occurred if we both had items we wanted or needed to purchase at the same time with the same pot of money. With the changes we agreed to, we will hopefully avoid that situation.

Have you ever had a conflict with your spouse because you disagreed on how to spend your discretionary spending? How did you resolve it?