Since our house was built over 60 years ago, it gets a little drafty. The last owners did some major work on the house (new windows, roof and siding), but didn’t update any of the insulation in the walls or upper ceilings of the original part of the home. Given that the upstairs gets so steaming hot in the summer, you would think it would stay warm in the winter. But it doesn’t.

So this past weekend, I decided to redo some ducts and while I was at it, add some insulation to the crawlspace behind our bed. Without getting too detailed, our home has 2 additions, which means 3 overlapping roofs and some very tight spaces for a big guy like me to crawl through if I went to get to the far reaches of the house to inspect or update (see photo to the left…it’s the hole from the old addition to the new, and it’s only about a foot wide). I’m pretty sore today, to say the least! 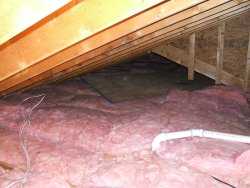 The room in which we sit most of the time is actually the newest part of the house, but seems to be more drafty than it should. I decided to crawl through the attic area (on the same level as our 2nd floor) to check the insulation levels above our den, and also look for any entry points for air. I was expecting to find half-filled rafters, but I was surprised to find lush fields of pink insulation (see image to the right). However, I did notice daylight from a 1/8 or 1/4 inch gap where the wall meets the roof. I bought some gap-filler spray, but realized I couldn’t reach the area from the inside or the outside. That section also has a vent to the outside, so I doubt the gap was for ventilation.

Back to the old part of the house. The furnace is under the floor near our bed, and the vent is right next to our bed, but not much heat actually gets upstairs. By the way, the whole upstairs is our bedroom (only a single room). We’re never freezing up there, but the ventilation just isn’t very efficient. There was a metal duct (that was not insulated) moving air from the furnace over to the bedroom vent. When the furnace is running, the tube is very warm to the touch, so obviously it’s leaking heat. Also, the seals between pieces were old and the tape was dried out.

I decided to change the metal tubing to insulated, flexible duct. I got a 25′ stretch of tube for about $25, but only needed about 10′. This also gave me an opportunity to inspect how dirty the vents get. Surprisingly, the vent was almost clean, so I don’t think we’ll need to get cleaners in. We can probably clean most of the other ductwork ourselves since it’s all so close to the furnace. 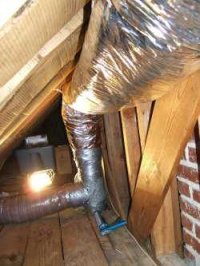 I took off the old metal duct, and put on the new flex-duct (the was already some other flex-duct running to the dining room off that node). I redid all of the seals, and used R11 duct tape. I’m not a master of HVAC systems, so I’m sure I could have done the work better, but it works and now I know it’s all insulated. You can see the work I did in the photo to the right.

The area shown is right behind the finished area (our bedroom) in a small cubby space that runs the length of the room. That brick wall you see is the chimney and on the other side of that is our water heater (it’s in the bedroom in a small closet). Normally the space is packed with holiday decorations, but I decided to clean it out so I can add some insulation to the wall.

I had an extra roll of R19 insulation from when we insulated our under-house crawlspace earlier this year, so I decided to use it to insulate the wall behind the bed. While in there, I got to see what the insulation along the exterior wall looks like and now I know it’s definitely inadequate. However, we’re planning to redo the whole upstairs next year, which will include insulating the walls and ceiling.

The pictures below show that there was absolutely no insulation in that space before, and now it has a nice padding of protection from any drafts floating over from the rest of the attic. I also used a block of the insulation as a door between the cubby to the older addition, which was probably the main entry point for cold air and exit point for warm air (and vice-versa in the summer). 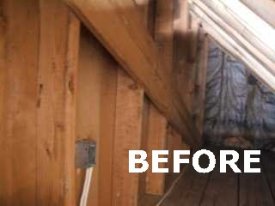 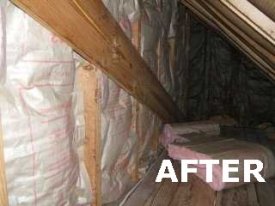 We still have quite a bit of work to do to insulate the house, but we can only do so much before needing to rip out walls and ceilings. I bought some precut pads that fit behind power outlets and light switches since those are also major draft points. I got them from Home Depot and they’re pretty inexpensive. I’ll also be crawling under the house to plug up the exterior vents with the bagged insulation from last year. At least now I don’t need to haul it in with me since I left the bags by the vents when I unplugged them in the spring.