Warranties, Good to the Last Day 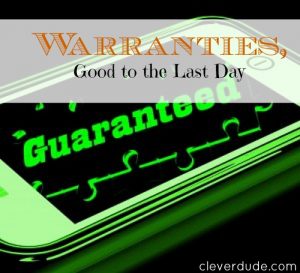 â€œDad, one of the buttons on my phone doesn’t work anymore.â€

I took my son’s iPhone as I asked him to point out which specific button wasn’t working. At his direction I pressed the volume down button and noticed the absence of that â€œclickâ€ action that would normally accompany the visual indication on the phone that the volume was being decreased.

The phone had a one year warranty, but I was sure we were getting close to the one year mark since we had purchased the phone. I called our cell phone carrier, who told me that any warranty claims would have to be made directly to Apple.

Wonderful, I thought to myself sarcastically as I realized that the nearest Apple store was about 80 miles away.

I knew that our best bet was to mail the phone to Apple for repair and wait for it to return. If you’ve ever suggested to a teenager that they give up their phone for an indefinite period of time, you’ll know it’s an understatement to say that my son frowned upon this idea.

This is how things sat for a couple of weeks.

When my son woke up Saturday morning, I asked him for a final answer as to whether he wanted me to send his phone in for repair, or if I should just forget about it. It was his phone, he paid for it, and I wanted it to be off my â€œtodoâ€ list for good. He said he would live with it as it was, since he could adjust the volume using a feature in the IOS software.

A few hours later we were waking through the mall and saw what looked like an Apple store. Obviously we had not been to the mall for awhile. We inquired within, and found that while it wasn’t an Apple store, they were an authorized Apple retailer and could deal with warranty issues. They plugged in the serial number and verified that it was still under warranty. They checked it over to verify it was defective, and that no other damage had been done to the phone. A new phone was brought from the back of the store, the SIM card exchanged, and they handed my son a brand new phone.

My wife exhaled in relief when the employee told us there was only three days left on the warranty.

When we got home, there was a little work to do. We had to restore the back up of his old phone from iTunes (always back up your phone!), and update it to IOS 7 since the new one came preloaded with an older version. He took the phone, poked some buttons to ensure his contacts and apps were all there. As he walked away he muttered under his breath, â€œI lost all the progress on my games, though. That sucks.â€

Have you ever returned something extremely close to the end of a warranty period? How close were you?