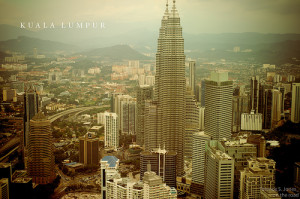 Kuala Lumpur is one of the most exciting and interesting tourist destinations in Asia. Travel to the Malaysian capital is possible from a wide range of airports around the world and it’s a trip you will remember for the rest of your life. Some of the highlights on the tourist trail here include:

There are not many cities in the world where a corporation’s headquarters qualify as a tourist attraction but the Petronas Twin Towers are definitely worth a visit. It was the world’s tallest building at 452 metres until 2004 when Taipei’s 101 was built.

There is tons of stuff to do here when you’re finished admiring the awe-inspiring structure of the towers. An upmarket shopping mall, one of the world’s best concert halls, a science centre and a beautifully landscaped park all contribute to making this one of Kuala Lumpur’s best tourist destinations.

This is one of the most colourful and vivacious parts of Kuala Lumpur. Visitors to Chinatown will be enthralled by the number of stalls selling everything under the sun from herbs and spices to fake designer clothing. And the best thing about shopping here is the price of everything is negotiable; haggling is a way of life in Chinatown. One thing to be wary of is pickpocketing: there is no need to be paranoid but like any busy marketplace there is a chance. You are concerned or tend to carry a lot of high value items it might be a good idea to consider getting travel insurance.

The Chinatown is also packed with restaurants selling authentic Chinese dishes and it’s extremely difficult to resist the smell of delicious food being cooked as you wander around. Be sure to check out Chinatown at night as this is when the place really comes alive with a number of fantastic bars lighting up the area.

The Batu Caves are one of the most popular tourist attractions in Kuala Lumpur. Situated 11km north of Kuala Lumpur, the structure consists of 3 main caves and a number of smaller ones in a limestone hill.

The caves are populated with a number of Hindu statues and the place is a very important landmark for the religion. The Hindu festival of Thaipusam takes place here at the end of January every year and attracts around 1 million people, making it one of the world’s largest festivals.

Thean Hou Temple is one of the most important cultural landmarks in Kuala Lumpur. It’s one of the biggest temples in South East Asia and a place of worship for thousands of Buddhists.

Inside the temple are a number of Buddhist images and statues honouring various deities. The grounds of the temple are a place of tranquillity and feature a Chinese herb garden, tortoise pond and sacred Boddhi tree.

This is the world’s largest aquarium and visitors get the chance to see many weird and wonderful fish from all around the world including tiger sharks, electric eels and piranhas.

A 90m metre tunnel is one of the highlights at Aquaria and features an authentic shipwreck along with dozens of rare species of fish. And if you’re feeling brave you can get into diving gear and join the exhibition with the aquarium’s Diving with Sharks program.