Vehicle Recall: Seven Months and STILL Waiting For The Parts 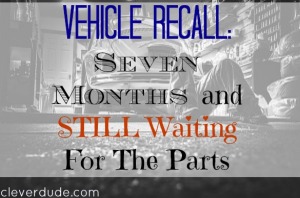 Every couple of months I hear about a major automobile recall. It’s good that auto manufacturers take responsibility for defects in their products, but you have to wonder why they seem to be happening so frequently. So while I was disappointed, I wasn’t surprised when six months after we purchased a new to us mini-van a letter from Chrysler showed up in the mail stating there was a defect with the rear vent window that could result in a piece of electronics burning up and was a potential fire hazard.

The recall letter instructed us to call our dealership to have the part replaced.

The dealership told us that they had not yet received the parts to correct the issue, but encouraged us to bring the van in to have the venting windows disabled to prevent any issue from occurring. At the time we had the windows disabled, we were told that they would call us when the parts came in to schedule the repair.

Another letter regarding the recall appeared in my mailbox last week that reminded me it had been over six months since we had our venting windows disabled. I called the dealership, and tried to explain my situation, but the service person kept interrupting me and simply told me that there continues to be a parts shortage, and we needed to be put on a list. I told the service representative that I assumed we had been put on a list when we had the windows disabled, and were told we would be called when the parts arrived. â€œWe didn’t have a list at that time,â€ was the response I was given.

In a nutshell, what he was telling me was even though they said they were going to call us, they had no intention of doing so.

I have two problems with this whole situation:

It seems to me that a letter or email to Chrysler is appropriate. I don’t know if anything positive will come of doing so, but I know that complaining to the dealership isn’t going to do any good. If nothing else, giving someone a piece of my mind about how expecting to use the features of a vehicle I paid close to $30K for really isn’t too much to ask. 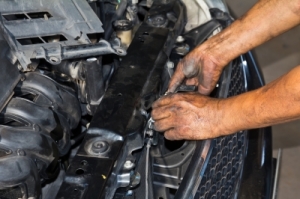 Image courtesy of markuso at FreeDigitalPhotos.net

What would you do? Do you think I’m being unreasonable, or would you think Chrysler should be able to correct the problem more quickly?