Using The Power Of Social Media for Good 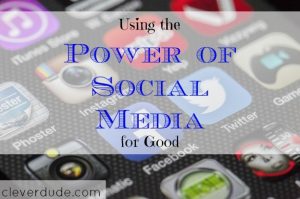 I admit, Iâ€™m a social media junkie. I spend quite a bit of time each day rolling through my Facebook feed, seeing what my friends and family are up to as well as documenting my own happenings. When used correctly, itâ€™s a great way to stay in touch with people you may find it difficult to find the time otherwise. You can roll through at your own pace, and I donâ€™t have to have find time to have the usual 30 minute phone conversation to tell my parents that my son got his driverâ€™s permit.

Iâ€™ve had friends take â€œa breakâ€ from social media, and Iâ€™ve also seen people make sarcastic remarks about the mundane daily status updates, or the constant barrage of political rants. Personally, I take the perspective that people are going to post whatâ€™s important to them. If someoneâ€™s training for a marathon, expect a lot of fitness updates. If someone enjoys politics, expect a lot of links to opinion pieces regarding the effects of the latest legislation or reaction to current events.

There are times, however, that social media can be a useful and powerful tool.

No, Iâ€™m not talking about the latest Kardashian selfie, or about the LeAnn Rimes â€œButtgate.â€ Iâ€™m talking about an actual useful application of social media to help yourself or others.

On Saturday morning, our neighbor posted that her dog had gone missing and asked people to keep an eye out for him. He is an elderly dog, hadnâ€™t been in the best health, and was hard of hearing. Both my wife and I wished her luck in finding her dog and really didnâ€™t think much else about it.

Until we spotted the small black puppy in the middle of the road on our way home from getting groceries.

He was only about a block away from home, and was being followed by some kids on bikes, who were knocking on doors trying to find its owners. Apparently the puppy had been on quite the excursion around the neighborhood. My wife got out of the van, picked up the dog and carried him home. Muddy and tired, he didnâ€™t put up a fight.

Our neighbor, looking exhausted from looking for her dog most of the night, came to the door and was ecstatic to see her pet in my wifeâ€™s arms. By the time we got home, there was already a new status on Facebook signaling the safe return of the dog.

Had it not been for social media, we would have seen the dog, likely not recognized him, and just wondered whoâ€™s dog was out loose. Maybe our neighbor would have put posters up, maybe the dog would have found his way home. Maybe something terrible would have happened as the hard of hearing dog tried to cross a busy street.

What I do know is that because of social media, we knew to keep our eyes open for a dog, and we were able to bring him safely home.

Thatâ€™s so much better than a Kardashian selfie.

What do you think of social media? Have you been a part of an event that used social media as a tool to help someone?