Tipping Etiquette When Your Restaurant Bill Is Reduced 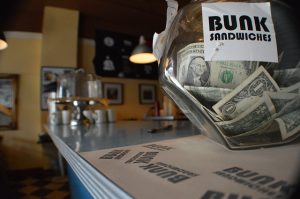 For a very long time I viewed tipping as an over and above payment for a job well done. While I still believe that is the purist’s definition, I realize that it has taken on a very different meaning in everyday life in the United States. Because of the way wage laws have been written, many people in the service industry rely on tips for the majority of their income. Whether you agree or disagree with it, it’s just how it works. Knowing who to tip and how much is complicated. I previously explored the subject of tipping for take out here on CleverDude, and even tried to at least introduce my son to the concept of being a good tipper. Over the weekend I experienced an scenario that added another page to the universal guide to tipping.

What is the correct tipping etiquette when the bill is reduced due to a mistake or a coupon?

My wife and I visited a nearby steakhouse for dinner on Saturday night. She never seems to remember what kind of steak she likes best, so as usual she asked me what kind of steak she usually orders. Knowing that she likes a tender steak with not a lot of fat, I reminded her she should order the 6oz filet. Also knowing that she likes it juicy, but does not like the texture of medium rare I told her to order it to be done medium. Unfortunately, when the steak came, it was well done. When our server returned to find out how our meal was, my wife showed her the overdone steak. The server went back to the kitchen to have a new steak made.

A few minutes later, the manager returned with a new steak. She asked my wife to cut into it to make sure it was to her satisfaction. This time the steak was cooked perfectly.

â€œTake your time, and enjoy your steak,â€ said the manager.

I reassured my wife that even though I was indeed done eating, I didn’t mind enjoying her company while she ate her steak. When the bill came, I noted that it was much lower than I had expected.  The imperfectly cooked steak, my wife’s statement, or both resulted in her meal being taken off her bill.

Which left me with a dilemma. Do I tip the server on the original amount of the bill, or the adjusted bill? I went through the facts of our visit in my head:

I filled in the tip line with a 20% tip based on the bill amount before it was adjusted. My wife had voiced her displeasure with the manager, who likely passed that along to the cook. That, and the fact that the restaurant lost a little revenue was our only recourse for the mistake. I reasoned that the server had done her job, and should not be penalized for the cook’s mistake.

How about you, Clever Friends? If you have your bill adjusted due to a coupon or mistake do you tip on the full amount, or the adjusted amount?