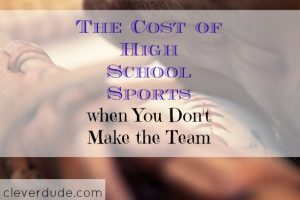 â€œDidnâ€™t make it, donâ€™t care,â€ was the text message I got from my son.

As a high school freshman, he was trying out for high school baseball for the first time.  Twenty one kids tried out for the â€œCâ€ team, the coach indicating that about 15 of them would make the team, with a few maybe getting playing time on JV if they needed extra players. For summer recreational baseball, kids are separated into Major and Minor leagues, and my son has always been selected to play in the more skilled league.  Heâ€™s always been one of the better players there too, so the thought of him not making the team didnâ€™t really cross my mind.

So his text message, which came after the conclusion of the last day of tryouts, surprised me.

First and foremost, I was disappointed for him.  I wasnâ€™t disappointed in him, as I knew he was a good player, easily coachable, and would contribute to the team.  I was disappointed for him because I knew, even despite the words of his text message, he did care.  Even through the statements of, â€œNow I donâ€™tâ€™ have to be at school twelve hours a day,â€  I knew that he was surprised too, and deep down wanted to make the team. No parent wants to see their child have to deal with failure. 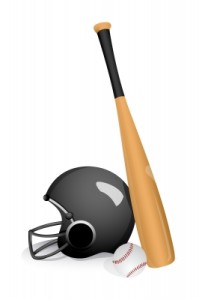 Then I started thinking of the financial impacts of the situation:

Activity Fee: We had paid $160 for him to play spring sports. A call to the school, had that money back in our bank account within 24 hours.  If you donâ€™t actually play a sport, they refund the money.

New Glove:  His glove ripped at the end of last summer and was not repairable.  We purchased him a new glove for $70

.  I hope that he will still want to at least throw the ball around with his dad or his friends when it gets nice out.

New Bag:  He had the same baseball bag to carry his equipment since the 4th grade.  We decided to buy him a new one for $40

.  His old bag certainly still did the job, though.

plus Athletic Cup combo:  $45.  If he doesnâ€™t play baseball, when will he ever use this again?  He needed to have those sensitive areas protected during tryouts, but maybe we could have found a less expensive temporary option.

Helmet:  In talking to other baseball players, they all had their own helmet.  He had outgrown his old helmet years ago.  Again, not allowing for the possibility that he wouldnâ€™t make the team, I bought him a new helmet

for $45.  We definitely could have waited on this purchase.

With the activity fee refunded and the glove being something I hope we will use whether he plays organized baseball again, that leaves us with $130 of stuff that he may never use again.   He used them for 4 days of tryouts, and of course we removed all the stickers and tags.

My first reaction was that we should have waited until he made the team to  buy all of the equipment.  But then again, I didnâ€™t want to tell him that weâ€™d buy him the stuff if he made the team, dousing his confidence before tryouts even began.

There is a chance he could use the equipment.  He could play one more year of recreational summer baseball, and there is another competitive league that the high school students play in over the summer.  He could choose to do either or both of those, and then tryout again next spring.  However, his confidence is now shaken, and his desire to ever play organized baseball again is in question.

Should school expect kids to provide their own equipment when they may not even make the team?  How would you handle this situation?