The Cost Of A Great Burger: Restaurant Vs Cooking At Home 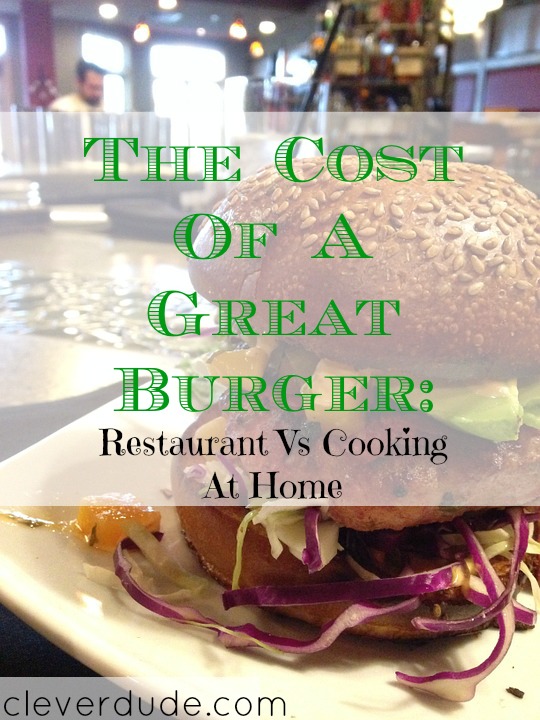 My wife and I spent all day Saturday doing tasks around our home. I had planned on grilling hamburgers for dinner, but when dinnertime rolled around we were both exhausted. We still had a craving for a good burger, but neither of us had the energy nor the motivation to fire up the grill.

Because we were both tired and hungry, we decided to go out to a popular burger place near our home.

We each enjoyed a perfectly made burger along with a beer. When we were almost done eating, we ordered two burgers and fries to take home to my son and one of his friends. After tip, our bill came to just under $48.

Suddenly I felt like I should have stayed home and fired up the grill. I wondered just how much it would have cost me to stay at home and have almost the identical meal. When I went grocery shopping that evening I added up the prices of the supplies needed to make 4 half pound burgers, fries, and two beers:

I would have saved $33.70 by staying home and making my own burgers.

Granted, there are a couple of things to keep in mind regarding the cost of making my meal at home:

The real reason for the difference in cost between our restaurant burgers and making them at home is convenience. Was having someone else do the work of making our burgers worth $33.70? Thinking about it a couple of days later, the answer seems to be, â€œNo.â€ Posed with the same question on Saturday night, my answer could have very well been the opposite.

How about you, Clever friends, do you think having someone else make a meal as easy as a hamburger is worth over $30? Have you ever calculated the difference between a restaurant meal and making the same thing at home?