Teens And Money: How To Adjust Your Teen’s Budget When Income Changes 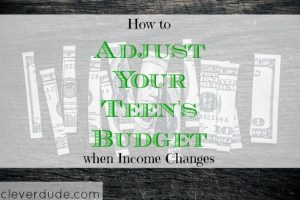 The balance between how much to save and how much to spend is a difficult concept to teach teenagers. It’s challenging because teens don’t have a firm grasp on how much things cost or the life experience to know what expenses they may face. The fact that a teen’s income from a part-time job is highly variable based on how many hours they are given by their employer adds another level of difficulty to finding the right balance.

My son has had a part-time job at a grocery store since April. He’s been earning good money working between 20 and 25 hours a week. We agreed upon an amount from each paycheck that he would have automatically transferred to his savings account the day after his payday. All of this has resulted in him having enough spending money to do things with his friends, and upgrade his computer as well as having a very healthy saving account.

Things have recently changed, however. A new grocery store of the same chain has opened up in general area. It’s very big, offering many product options and services not offered by other stores even within the same chain. People have been flocking to the new store to check it out, causing a slow down in customer traffic at the store where my son works. Everyone has been having their hours cut as the store doesn’t need as many people working at a time.

With smaller paychecks, the inevitable question from my son is, â€œCan I save less?â€

Before answering his question, we talked about his three options:

He could reduce the amount he saves, and maintain the same amount of spending money he’s gotten used to. It’s easy to fall into this option with the reasoning that he’s still saving. By taking this option he may, unfortunately, sacrifice his long term goals of purchasing his own car and having money saved for college.

If he kept the amount he saves the same, he would have considerably less to spend. This is the, “Pay yourself first,” perspective. While this is the best option for reaching long term goals, he may begin to question why he’s working to get so little money to do with what he wants.

We could look at the amount of his average paycheck with reduced hours, and reanalyze how much he needs to save, and how much he can keep. He would reduce both how much he gets to keep AND the agreed upon amount to be saved.

The balanced approach option is the one that I would take for our family’s budget if our income was to do down, or when it goes up. When income changes, it makes sense to sit down and reanalyze income, expenses, and savings to create a budget that makes sense for ensuring bills get paid and there is a balance between enjoying life now and saving for long term financial goals.

My son appreciated working together to come up with a solution that we could both be happy with. I mentioned that if he started getting more hours again in the future, we would also then revisit his money management again.

There was certainly an immediate need to discuss my son’s finances with him and make some changes. But our conversation also showed my son that finances are not static. Life changes require financial changes as well. Hopefully it’s another financial lesson that will stick with him to apply again later in life.

Do you reanalyze your budget when income goes up or down? Which approach do you take?