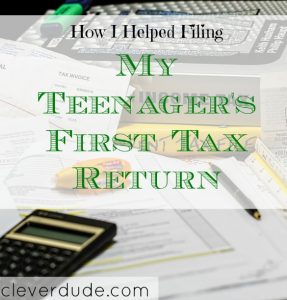 In my efforts to gather all the documentation needed to do my taxes last weekend, I ran across my son’s W2 form from his part-time job.  I had tucked it away with other tax related information, and it reminded me that this is the first year my son may have to file a tax return. He had NOT forgotten as I had previously told him he would likely get a nice refund.  I could tell he was anxious to see what kind of windfall he might be getting.

Since this was new for both him and me, I did some research regarding filing tax returns for children.

Does My Teenager Need To File A Tax Return?

Children who have earned income greater than the standard deduction, or have investments or interest income greater than $1000 must file their own tax return. Since my son earned a little over $7100 in 2015, he will have to file a tax return. However, even if he hadn’t earned more than the 2015 federal standard tax deduction of $6300, he would likely have wanted to file anyway as it’s the only way to have the government disperse a tax refund if one is owed.

Will I Need To Alter My Tax Return?

For the first 17 years of his life, I have claimed my son as a dependent on my tax return. Dependents are a tax deduction and therefore reduce my overall tax bill to the government. I can continue to claim him as a dependent if:

All of the above are true, therefore no alterations are needed to my tax return.

Including Him In the Process

Once I was sure he needed to file a tax return, AND that his part-time job would have no effect on my own return it was time to fill out his tax return. I wanted him to be part of the process to prepare him for having to do it on his own when he’s an adult. I had already purchased tax preparation software for my taxes, so I just had to start a new return and fill in his personal information. He helped me answer the questions asked by the software, and fill in the information from his W-2. Because his taxes were simple, it took less than 15 minutes to complete the federal and state forms. I pointed to the number on the top of the screen indicating he was due a refund of several hundred dollars. He smiled and nodded as he asked, â€œHow long will it take for me to get it?â€

We e-filed, entering his checking account information for the refund. I told him that he could expect to see the deposit into his account within a week or two.

Helping my son do his taxes for the first time was another financial lesson that will better prepare him for being an adult. It showed him that by having all your tax information readily available, along with tax preparation software, doing your taxes doesn’t have to be a painful process.

Have you prepared a tax return with your child? Did you parents involve you in the process of your first tax return?