budgeting • What Would You Do?

Stuck In a Snow Storm – What Would You Do? 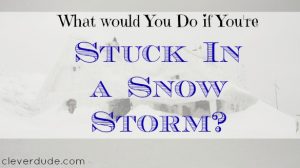 Five inches of fresh snow, followed by wind gusts up to 50mph meant we weren’t going anywhere. Together with the other families we were on a midwinter vacation with, we shelled out the money for another night’s stay at the hotel.

When we left home a few days earlier, the weather forecast was much different. What had originally been projected as a few inches of light snow turned into a major winter storm producing blizzard conditions that brought driving visibility to near zero across the parts of the Midwest. Friday evening, we all stared at the TV as we watched the weather segment, wondering what we should do. We had two choices:

I was honestly hoping that the weather forecast would be wrong, as they frequently are, and that we’d be on our merry way Sunday morning. Unfortunately the storm unfolded exactly as predicted and we found ourselves staying the extra night. There were some complications as we had to all had to call our employers informing them that we would be missing from work on Monday. While bosses were generally understanding, burning an unexpected vacation day in January is not usually desirable.

We spent the extra day doing the same things we had been doing the previous days of our vacation: flying down water slides on inner tubes, relaxing on lazy rivers, and bobbing up and down in the wave pool while the wind howled outside.  Reconciling the checkbook later that night, I winced just a little as I subtracted the extra hotel fee from the balance, not sure if staying the extra day was the right decision.

What would you have done, gone home early and just eaten the hotel fee for the night lost, or paid for an extra night to wait out the storm?