Some Lessons Are Expensive 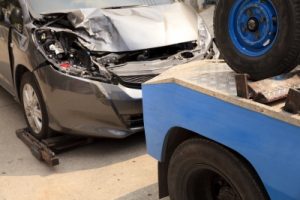 Image courtesy of Naypong at FreeDigitalPhotos.net

I was doing some yard work in the front of my house when my son’s friend got in his car to head to work. A few moments later a loud high pitched scratch made me look up and realize that the young man’s car was rubbing against the telephone utility box that was on the side of our driveway. I started walking towards the car, trying to signal for him to stop. He didn’t see me, and instead put his car into drive scratching his car again going forward this time. My pace quickened, and my yells grew louder but he didn’t hear me. As he inched forward he ripped the cover off of the metal box resulting in pop, a hissing noise, and a flat tire. He finally stopped.

He exited the vehicle with his hands on his head as we both inspected what had happened. He had damaged the utility box pretty bad, he had a deep scratch along the bottom of his back door and the side of the back bumper to go along with his ruined tire. I could tell he was very upset about his car, but he just kept apologizing to me about the utility box. I smiled and told him that the box was the telephone company’s problem, and that I wanted to help him get his spare tire on so he could make it to work. That seemed to calm him down a little bit.

I knew he was in a hurry, but I made him watch and learn as I changed his tire. He continued to apologize as I threw his flat tire in the trunk. I put my hand on his shoulder and reassured him again that everything would be fine. I made sure he knew our phone number in case his parents needed to call and speak with me.

This teenager’s financial state took a significant turn in the course of just a few seconds. One minute he was a kid with a part-time job, his own car and not a care in the world. The next minute he’s standing next to the scene of an accident that would have to be dealt with.

The gash in his tire was several inches long. I don’t think there’s any way that was going to be repaired. He was likely looking at $80-$100 to replace his tire.

I can’t even begin to estimate how much he would have to pay to have the damage to his car repaired. He had insurance, but he indicated he may not submit a claim because HE pays his own insurance and knew this would probably make his rates go up. He would likely either pay out of pocket to fix it, or live with the damage.

I wasn’t sure what the outcome of this would be. We talked to our neighbors, either they didn’t have a phone line through the phone company (ours is through our cable company), or their phone worked just fine. We called the phone company, and they made note that it was badly damaged and would send someone out to look at it. The representative indicated we wouldn’t be charged anything to repair it. They haven’t been out to our home yet to do the repair, so who knows if that’s true or not. If there is a bill to repair the box we’d have to talk to the boy’s family. I really hope that doesn’t end up being the case.

My son’s friend learned some lessons that day about paying very careful attention to your surroundings when driving. Had he stopped at the first sign of trouble, and assessed the situation we could have steered the vehicle to minimize damage to his car and the utility box. Even though in this moment the situation will be fairly expensive for him, it may serve him well, and help him become a more attentive driver.

Have you ever learned an expensive lesson? How much did it cost you?