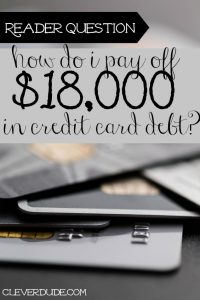 I got a question from reader John that intrigued me in how I would answer, as well as tips that you, my readers, could provide:

Hey there Mike,  I have been following your blog for a few months now. I was just reading the “Our remaining Debt” and saw that you paid it off in 3 years.  I have about $18,000 in credit cards.  What do you suggest to pay these off as quickly as possible?

Just a quick update before I get into answering the question. If you haven’t been following the site, we started with well over $100,000 in consumer debt (not counting mortgage), and paid it off in about 4 years. Sure, there were minimum payments for about 5 years prior to that, but they barely made a dent in the principal debt owed. In that time, we also acquired new debt in the form of a couple cars, but paid those off either with the money earned from selling existing cars or from savings, which was an amazing feeling to even having a “car fund” in the first place!

Oh, and I’ll have another announcement about our debt situation coming up soon, so keep an eye out for it.

Now, for John’s question. Without details on interest rates, how many cards the debt is spread across, your income, etc., I can only comment on how WE went about getting rid of our $20,000 in CC debt (really it was up to $25 a few times).

John, feel free to comment with additional information or other questions to help me refine my answer more. And same goes with all you other readers. Share your tips if they differ from mine. Is it more than just focusing on one debt, stop overspending and try to get extra income? How else did you motivate yourself successfully?

I’m personally motivated by goals. If I know there’s an end in sight, I can accomplish the goal. Otherwise, I procrastinate and never do anything. Others are motivated in other ways, so share your thoughts!