Parenting: You’ll Be Amazed At What Kids Can Do On Their Own 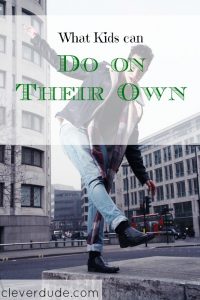 My son needed a physical to sign up for his high school’s golf team. He made the decision a bit late, and thus we had less than a week to complete the physical, and get the proper paperwork filled out. The only time slot our medical clinic had available before the deadline was during his open hour at school the following Monday.

â€œAre you coming with me?â€ my son asked me.

â€œDo you need me to?â€ I responded.

â€œIt would be kind of strange if you didn’t,â€ he stated.

What he really meant was, one of his parents had gone with him to every doctor’s appointment in his life and he would be more comfortable if one of us went. He was unsure if he would know what to do. A quick check of my calendar revealed that I had meetings, and my wife is unable to leave work. He would have to go on his own. I assured him that all he had to do was walk in, and check in at the desk. He also verified that he knew how to get there.

A few days later, he reminded me that he needed new shoes. I had asked him several times to come with me as I was going to the mall, or most recently a nearby shoe store to get new running shoes. Every time I asked, he was consumed with some other activity. This time, however, I was busy and could not go.

â€œDo you need me to come with you?â€ I asked.

‘I guess I could look on my own,â€ he said reluctantly.

I told him to buy the shoes with his own money, and I would transfer money into his account to reimburse.

As expected, he successfully bought a pair of shoes on his own.

Parents know that their kids will grow up and become independent. As hard as it is to accept, not only do we know that it must happen, we know that we must make it happen.