Opportunity Lost? A Financial Conversation Overheard At The Movies 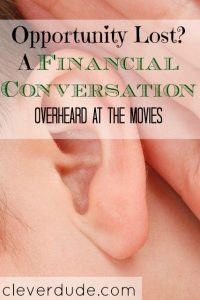 â€œHow is it I only have $3 left?â€ I heard a female voice say from behind me while standing in the movie theater concession line.

â€œBecause you buy stuff?â€ I heard a different voice respond.

I pretended to be just generally looking around the theater’s atrium as I snuck a glance at what appeared to be a mother and daughter. The line was long, so I listened to the conversation continue as I looked straight ahead. The daughter was home from college for the weekend, and was checking her checking account balance online using her cell phone. Their interaction kept bouncing between the checking account balance, and what they were going to purchase once they got to the front of the line.

Eventually the daughter got to the source of her lower than expected account balance. There had been a transaction of $103 at a business that sounded likely to be a bar or restaurant. She admitted to her mother to being familiar with the establishment, but didn’t remember spending $103 there. The conversation then took a surprising twist.

â€œThe date of the transaction is January 28th. Why would I have been there on a Wednesday?â€ the daughter said.

I just shook my head as my mind went into overdrive with a couple of thoughts:

Had this been my child, I first would have had a serious discussion about how important it is to check your accounts frequently. Between mistakes made by businesses, identity theft, and the sheer difficulty of reconciling account after weeks of activity, I know how important this is. Second, the right way to handle this situation would be to call her bank and dispute the charge. A call to the establishment wouldn’t hurt either, but they likely wouldn’t have remembered anything.

I don’t know the full story, nor will I ever know how this turned out. The conversation I overheard was simply a snapshot of the situation. For all I know, the daughter later remembered the exact details of that $103 charge. But, part of our job as parents is to prepare our kids for life on their own, and to ensure they have the skills they need to be successful once they get there. It didn’t seem to me that this young woman has been taught enough financial skills to be successful once she head out on her own once and for all. Additionally, in my opinion, the mother missed a great opportunity to teach her daughter some very important lessons. 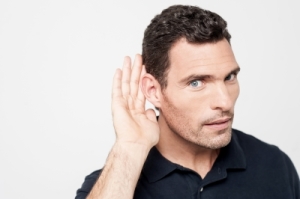 How would you have reacted as a parent if this was your child?