One retaining wall down, 5 more to go!

I’m writing just because I want to show off the retaining wall I finished a few weeks ago. This wall was a practice run for the much longer and more complicated retaining wall that will stop the dirt and mulch from washing away from the pool landscaping. The wall is near the pool (as you can see, although the pool no longer has the cover as we opened it 3 weeks ago) 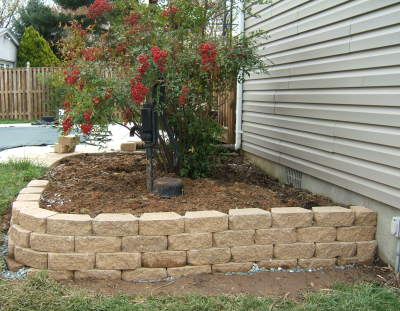 I still have to place capstones on it to make it look prettier, and probably push some dirt to cover the gravel in the front. I had to redo the wall once when I learned I should surround it with gravel rather than dirt to increase drainage. I’ll probably dig up the left-side once more to finish the wall the whole way to the patio (another 3 feet), but for now it does the job. Oh, and if you’re wondering, that’s only an ornamental water pump.

This wall took about 3 hours of digging, measuring and stacking the first time, and then another 2 hours when I redid it. That doesn’t count the time taken to get about 90 bricks, a 1/2 ton of gravel, or to recuperate from falling on the wheelbarrow.

I believe each pallet has 144 bricks, and delivery is about $75, so I’m considering just buying 2 pallets (or more considering I have 1 more large wall and 3 small ones to do). It wouldn’t cost me $75 in gas for those 6 trips, but the time I’d save would be worth it.

Well, I’m sure that I’ll post the final pictures when I’m all finished, so look for them in oh, about a week or two.