It Pays To Complain 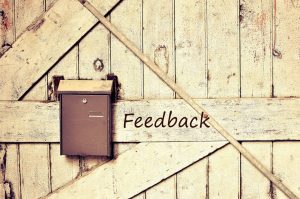 Many businesses ask for your feedback. Just in the last week I’ve received requests to answer survey questions from a pizza place and my cell phone provider. Some companies even offer an incentive to fill out the survey such as a free appetizer or 10% your next purchase. The incentives help push people to do the survey, as most people (myself included) won’t make the time to do the survey if there’s nothing in it for them. Businesses want your feedback to help them improve their products and services, but it can also help them rectify a customer’s bad experience.

Giving businesses honest feedback about a bad experience provides the opportunity to make it right.

I ordered flowers online for my mother-in-law, to be delivered on Mother’s Day. The day came and went and my mother-in-law didn’t say anything about the flowers. No text message, no email, and no post to social media, even though I got an email confirming delivery. The next day when my wife inquired as to whether she received her flowers, her mother stated she had not.

I took a closer look at the confirmation email, and saw a note that the delivery person had left the flowers in between the outside and inside front door. I hadn’t examined thoroughly the day before because we were out of town and traveling by plane home. We passed this information along, and my mother-in-law found her flowers.

I wasn’t happy that the flowers were left in-between the doors with no indication to my mother-in-law they were there.

Several days later I found a survey request from the company I ordered the flowers from. I hovered the mouse pointer over the delete button, as I didn’t think it would be worth going through the trouble of filling it out. But something clicked, and I decided to communicate my unhappiness.

I hit the reply button and filled out the survey describing why I was unsatisfied.

I didn’t expect to hear back, but within a few days I received an email from the company apologizing for what had happened. To make it up to me, they included a coupon code for $25 off my next order. Honestly, I had consciously made a decision to never use that company again. However, with their admission of making a mistake and their attempt to make it up to me I’ll likely use the coupon to order flowers for my wife for our upcoming anniversary.

The company’s apology and $25 coupon won me back as a customer.

When we have a bad customer experience, we can either choose to do nothing and never return, or we can let the company know we are unsatisfied. Both are a valid course of action, however by choosing the latter we can give the service provider to make it up to us.

Have you ever received a coupon or money back due to a bad customer experience? What’s the most a company has done for you? The least?