Is Any Sale Really Final? 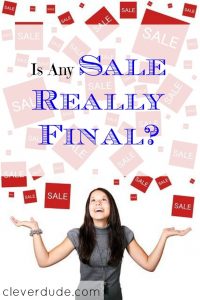 â€œJust to let you know, all Halloween sales are final,â€ said the cashier as she handed me the receipt. Nodding our heads in agreement, my wife and I walked out the store with a bag full of decorations. I had pulled the bins of fall items we already owned out of the attack earlier in the afternoon, and my wife and I decided we wanted to enhance our decorations for the upcoming Trick or Treat festival.

One of the items we had found was a battery operated spider that attaches to the top of a door frame. When someone comes near it, a motion detector would cause the spider to drop down on a string, itâ€™s eyeballs would flash, and then it would emit a scream as it began to retract the string and climb back up to its perch. 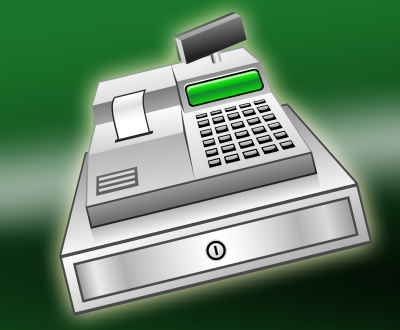 Iâ€™m not much of a holiday decoration guy, but even I had to admit it was pretty cool.

The next morning, as we were putting up our decorations, my wife attempted to turn on the spider by flipping the switch on the underside of the spider. Unfortunately, whatever attached the switch unit to the body of the spider broke, and the switch fell inside the product. We could not get it out, and there was no way to repair the spider without breaking it.

With the product and receipt in the bag, we returned to the store.

Inside the store, we were greeted by a long line in front of the checkout counters. To help save time, while we were waiting in line my wife grabbed another spider hoping to simply do an exchange. After about ten minutes we reached the front of the line and were motioned over to an open register.   My wife explained what had happened, and stated sheâ€™d like to exchange the broken spider for a new one as she pushed the unopened package towards the cashier.

â€œAll Halloween sales are final,â€ the young lady behind the counter stated with her voice sounding a bit unsure.

â€œWeâ€™re not returning it because we donâ€™t want it, we want to exchange it because the one we purchased is broken,â€ I said firmly, emphasizing the word, â€œbroken.â€

The cashier called for her manager.

We waited for the manager to come, and for the two employees to have a conference. After a short discussion, they announced to us that they would be allowing us to exchange the broken spider. I turned my head and rolled my eyes.

Although the outcome was, in my opinion, the correct one, it sure seemed a lot harder than it had to be. Had they decided to stick to their â€œall sales are final,â€ statement they likely would have had an irate customer to deal with. At some point we may have decided that the $9.99 the spider cost wasnâ€™t worth the aggravation. Knowing my wife, she probably would have continued to push just for the principle of having an expectation of purchasing a working product.

The best course of action would have been to simply ask a question when we made our purchase to clarify the â€œall sales are finalâ€ policy and to get the employees name. Having a name, and that clarification could have helped if we had run into greater resistance trying to get a working spider.

Have you ever tried to return or exchange something that was broken in an, â€œAll sales are final,â€ situation? Were you successful?