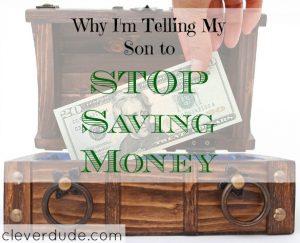 I’m encouraging my son to stop saving money. Even though we had an agreement that a certain amount from each paycheck would be automatically transferred into his savings account, I told him that I wanted him to stop.

My son wanted to register for the high school golf team.

His friend, who was on the team last year, talked him into doing it even though I can count on one hand the number of times he’s played golf. Golf practice is after school, Monday through Friday until 5:30. The timing means that he cannot work any after school shifts at his job, since after school shifts start at 4:00.

His income will be significantly lower for the next two months.

During the high school golf season, he will be restricted to only working weekend shifts. This will decrease his income significantly. I also want him to have the funds to be able to do the things that normal teenagers do.

I told my son to disable the automatic transfer to his savings account.

Since his income will be lower, I’m allowing him to temporarily stop saving money out of each paycheck and keep all of his income for fun spending. During this period his savings account will not grow, but there’s a couple of reasons I’m OK with the situation:

My son’s part-time job has provided the opportunity to teach him a wide range of financial lessons. His desire to join the golf team has lead us to another such opportunity; sometimes money isn’t the most important thing.