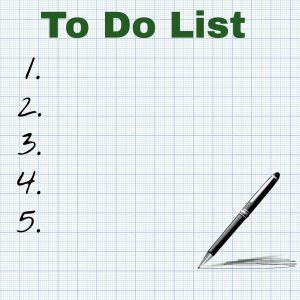 A notebook sits on my kitchen counter open to my current todo list. I add things as necessary, and cross things off as they are completed. My wife even gets in on the process by adding things to the list that she wants me to do. My list is constantly being re-prioritized, and sometimes tasks fall off the list completely when it’s time to rewrite the list onto a new page. As I’ve found out recently, removing items from my todo list may cost me a lot of money.

Putting off items my wife requested may end up costing me a lot of money.

On Friday afternoon I heard my wife making phone calls trying to collect estimates to do some things around the house. After listening for awhile, I waited until she hung up from a particular call and stated that all the things she was inquiring about were things I could do myself.

â€œBut you haven’t done them, and they need to be fixed.â€

Here’s a list of the things that had dropped off the todo list that were suddenly in the forefront of our conversation:

There is a GFI outlet on our deck that has stopped working correctly and needs to be replaced. During the winter we weren’t out on our deck anyway, so I lost track of the task. Now that it’s getting nice outside, we’ll be spending more time on the deck, and we’ll need the outlet.  I’ve replaced outlets before, so I should be able to knock this one out quickly.

We have a three way switch in our kitchen that isn’t working right. I suspect one of the switches is worn out. I was going to replace all three switches and see if it works. There’s always a combination of the three switches up or down that work, so I didn’t see it as a big deal. My wife, however gets really annoyed at it.

My wife has been asking for years for me to paint our front door, as well as the door that leads from the house to the garage. It never seems to make it to the top of the list since the doors are functional, she just wants them a different color. Someone told her that the best way to have it done is as an auto body place, which turns out is super expensive. Although we could potentially hire a painter to do it for us, as well, the estimate she got is from the auto body shop.

My wife is (rightfully) tired of waiting for me to complete these tasks. They are things I know I can do myself, but I’ve just never gotten them done. I don’t know if her phone calls were intended to be a wake-up call, her taking matters into her own hands to get the items completed, or a little of both. But I know that I would rather save money and do them myself.

I begged for one more chance.

I asked my wife to allow me another shot at getting the items done. If I can’t figure them out or they turn out to be more work than would allow me to get them done in a very prompt manner, then we can pay to have them done. Luckily for me, she reluctantly agreed.

I’ll be picking up the needed supplies this afternoon.

This is my last shot to save money on these items, otherwise I’ll be fixing them with my checkbook.

How about you, Clever Friends? Has your significant other ran out of patience for you to complete a task on the todo list?