If You Buy Concert Tickets Online, You NEED to Read This 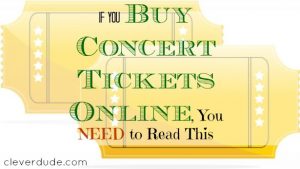 Image courtesy of digitalart at FreeDigitalPhotos.net

I remember the excitement I felt when we bought the tickets. My wife and I were out for dinner, and we had heard about the concert earlier in the day. While we were eating we decided we would go see Nickelback when they came to the area a few months later. With a quick internet search on the iPad, we were picking seats and paying for the tickets. We would find out later that we had unknowingly overpaid for the tickets by a significant amount.

The concert ended up being cancelled, as the lead singer of the band needed surgery on his vocal chords. We were able to cancel our hotel, and the message on the venue’s web page said that if we bought the tickets directly from their ticket office the purchase price would be automatically refunded within 5-10 business days. I was sure that we had gone directly to the venue’s web page when we purchased the tickets, as we had looked at maps and pictures of the venue. When no refund appeared on my credit card statement after three weeks, I did a little investigation.

After looking closely at my receipt, I discovered I did not buy the tickets directly from the venue.

I had actually purchased my tickets from a ticket re-seller called Event Tickets, LLC. Searching the internet, I found a mountain of negative reviews from customers that had the exact same experience I had. They thought they had purchased their tickets from a venue’s box office, but had really bought them from Event Tickets. From what I read, they purchase Google Ads so that when you search for an event or for a venue name, their name pops up at the top of the search results in the ad section of the results.

After learning this, I did an exercise in which I performed a search for an upcoming event at the same venue, and the venue name. Paying closer attention to the search results, there were actually several ticket re-sellers that were displayed. Event Tickets, LLC is not the only company that does this.

By poking around on the venue’s website, I also found that the re-seller jacked up the price of the tickets. The tickets to the concert were in three tiers: $40, $60, and $80. Yet our tickets were $105 each PLUS more fees and surcharges.

This experience as taught me several lessons:

I was skeptical about what the outcome would be as I picked up the phone and called the number on my receipt. My expectations dropped when the person I talked to did not know that the concert had been cancelled. She put me on hold, and when she came back she was convinced that the concert had indeed been cancelled, and that my money should be refunded. She correctly verified my name, address, amount to be refunded, and my card number. The refund would take another 5-7 business days. I’m hopeful that I’ll get my refund, and I can put this whole experience behind me.

Have you ever purchased tickets from a ticket re-seller? Did you experience any problems?