I Will NOT Let My Son Waste His Summer Vacation, Or Our Gym Membership 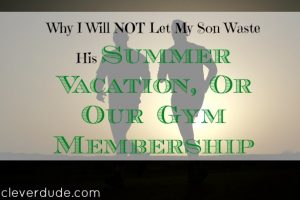 Summer vacation meant being outside all the time. Riding bikes for hours, playing baseball in an empty lot, and building forts at the edge of town were the norm for me. But this summer isn’t working out like that at all for my fourteen year old son.

We live in a much larger city than I did when I was growing up, and my son’s closest friends don’t live within biking distance. We make an effort to put him in the same physical space with his friends, but he largely spends his days with a headset on, playing online video games with his friends late into the night. If it wasn’t for him being involved in summer league baseball, and the occasional help with mowing the lawn, I’m not sure if he would ever leave the house.

I had to do something.

Before summer vacation began, we switched from the inexpensive, bare bones gym that my wife and I had been using to a full service gym so that our family would have a wide variety of healthy and fun entertainment options to take advantage of. My son has not wanted to go very often, and thus I feel like it’s been a waste of money on many levels, as it was supposed to be something we did as a family.

Last week I gave my son an ultimatum.

My job affords me the flexibility to work whatever hours I would like as long as I get my work done. I told my son and wife that although I very much enjoy getting my workout done first thing when I get up, I would be changing my schedule to begin work at 5:00am, allowing me be home for the day by 2:00pm. At that time, we would be packing up our gym gear and heading as a family to the gym. I also warned them that this was their audition to stay at the full service gym they had lobbied hard to join for the summer, instead of going back to the bare bones gym (which suites me just fine) in the fall.

I further informed my son that we would be doing a strength training program together 4 days a week for the rest of the summer. When school begins again, if he doesn’t like lifting weights we can stop.

This helps me achieve several goals:

My son and I have had our first strength training sessions together, and so far he seems interested. I’m hoping that this is something that he’s been interested in, but he just needed someone to give him a kick in the pants to get started.

Do you think my ultimatum will work, or do you think eventually he’ll lose interest and give me a hard time about going to the gym?