I Destroyed My Phone, What Should I Do? 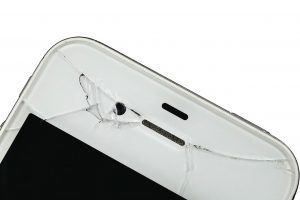 Stupid mistakes can cost a person, and my most recent dive into stupidity is going to cost me plenty. I stopped at Walmart on my way to the gym this morning to pick up some needed supplies. I didn’t want to take my phone in with me, so I put it on the floor behind the console between the front seats of my van. When I returned from the store, I noticed the console (which can slide backwards to make the cup holders usable to passengers in the middle row) was not locked into place. I tried to slide it into the locked position, but something was stopping it. I pulled harder and harder until I slammed it into place. It was at that point it occurred to me that my phone was in the general area of the console, and it may have been the object that was preventing the console from locking. Sliding the console backward and reaching down confirmed my fears. I tried to unlock my phone, but all I saw were some faint flickers of light.

By forcing the console into a locked position, I had crushed my phone horribly.

I was going to have to get a new phone, which was disappointing because I purchased my current phone on the AT&T Next plan 19 months ago. I was only 5 months away from it being completely paid for. The phone was working fine, and I expected it to last me quite a while resulting in a lower cell phone bill. Now I would have to shell out a significant chunk of money for a new phone.

Given my family’s current phone usage, and the fact that we have several phones still being paid for monthly, I’ll be looking for a phone that can be seamlessly integrated into our current AT&T plan. Here are what I view as my choices:

I didn’t want to buy a new phone, but in my opinion buying an older generation new phone is my best option given my situation. I don’t need the latest and greatest phone. This options gives me a functional phone with a warranty and with the reduced cost and Best Buy gift card makes the most economic sense.

Have you had to unexpectedly had to buy a new phone? What was your reasoning behind the choice you made?