How Much Does a Ride Wristband Save You At The County Fair? 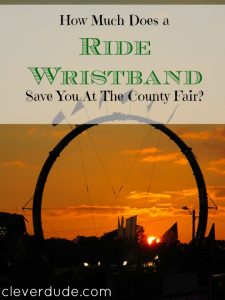 The smell of corn dogs, hard rock music blaring, and the allure of winning a stuffed animal as big as a person with a single throw of a ball can only mean one thing.

We usually head to the fairgrounds one evening during the week the fair is town to get our fill of carnival rides for the summer. However, we always follow a few rules:

I was discussing these rules with some new neighbors of ours, who recalled that last year they had purchased tickets for the rides instead, and that they didn’t last very long. Driving to the fair later that evening, I decided to see just how good of a deal purchasing the wristband was.

While we were waiting in line to buy a wristband for my son and his friend that had tagged along, I noted that we could buy a wristband for $20, or we could purchase tickets at a price of $1 per ticket.  As long as each boy went on more than 20 tickets worth of rides, the wristband was worth it.

We had picked Thursday night to go, thinking it would be less busy than the upcoming weekend,  and we were right. The boys never had to wait more than five minutes to go on a ride. I kept track of the number of the tickets that would have been needed for the rides the boys went on to get a handle on the value of our wristband purchase.  We were at the fair for about 4 hours during which the boys each went on 20 rides each costing 4 tickets each.

If we had bought tickets instead of wristbands, those rides would have cost $80 per person!

Going to the fair is a special event that does require a little extra money, but by following our three rules, we can minimize the overall cost of the experience.

Have you ever kept track of how much you would have paid in individual tickets at a fair instead of buying a wristband? How much did it save you?