Have You Noticed Credit Card Offers Are Changing? 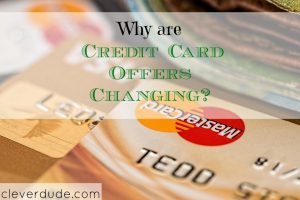 Some common offers I’ve seen in the past are:

But with the Federal Reserve raising interest rates a tick, borrowing money is now just a little bit more expensive for banks. As the rate increases, those zero percent introductory offers will become less common. While a quarter of a percent isn’t much, it is likely the beginning of an upward trend for interest rates and consumers can already see the effect it has on credit card offers.

It will be interesting to see what happens to interest rates in the coming months and years, and what effect those changes have on credit card offers.

How about you, Clever Friends, have you received any out of the ordinary credit card offers recently?