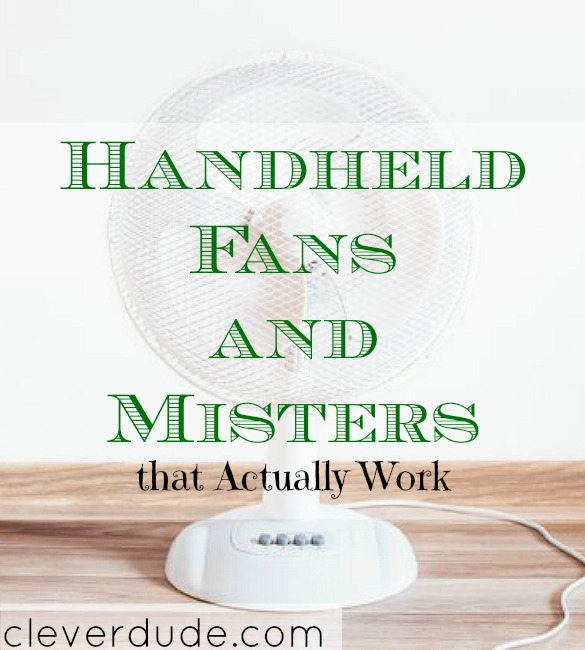 You might discredit them as too flimsy but there’s a very specific use case for handheld fans and misters: When you’re stuck somewhere without any other way to cool off.

For instance: Outdoors without a breeze, shade or a body of water to jump into. Or,  indoors without any circulation, like during a power failure that effectively shuts down your air conditioning and any fan that plugs into the wall.

In these types of situations, this type of battery-operated handheld might even bring you back from the brink of heat stroke or even dehydration.

That said, not all battery-operated fans and misters are dependable; some don’t last long before falling apart.

Finding ones that are hardy is essential, especially if you need to rely on it — like if you work outdoors or intend to go on camping trips. Fortunately, some models can stand up to a lot of use, and here are a few of them.

This brand appears to be a big hit among people shopping for handheld fans on Amazon — all of the company’s models have good reviews.

The latest iteration of OPOLAR’s portable misting fan includes rechargeable batteries that hold 2,200 of capacity and that you can you can power up with a USB charger.

This version costs about $20 and qualifies for free two-day shipping with Amazon Prime.

Although this particular brand offers an assortment of handheld fans, the one that gets the highest reviews on Amazon is intended to hang from your neck. It won’t weigh you down, though: it’s smaller than other handheld fans.

Yet, it appears to have a lot going on — such as operating in two speeds. A set of two AA batteries will keep this fan going for two hours. With all of this costing just $12.97 for Amazon Prime members, this device just might redefine cool.

The most versatile device on our list is this actually doubles as a fan and a mobile phone stand. It also rotates 360 degrees and has three different speeds too.

It comes with a rechargeable battery that takes four to six hours to juice up; how long the full charge lasts depends on which of the three speeds you run the thing at. The slowest speed will enable you to use the device for 13 hours, while the fastest will conk out after three hours.

Plus if you don’t feel like carrying it around, the base can expand into a tripod, allowing you to stand it up on desks or other surfaces. With a price tag just below $13 and available Prime shipping on Amazon, this one’s not a bad deal at all.

One thing that handheld fans and misters have going from them across the board: They’re very affordable.

And while their strong reviews should mean these devices should last longer than many competitors, just remember that they’re not replacements for the kinds of fans you plug into the wall — let alone air conditioning.

Readers, what’s your favorite way to stay cool during summer?

Looking for more great articles? Here are a few to get you started:

If you enjoy reading our blog posts and would like to try your hand at blogging, click here to get started.