Giving the gift of a European vacation 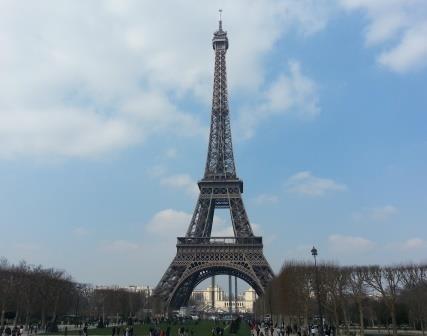 While most of our friends are parents now, sometimes of their 3rd or 4th child, kids are not in our plans for anytime in our future. It’s not that we don’t like kids, because we love our nieces, nephew and friend’s kids, but rather we have different priorities and some challenges, but that’s for a different article (and I’ve talked about it before). But whereas our friends are spending money on their kids (schooling, clothes, activities, food, etc.), what are we doing with our money?

Well, outside of working to save up more towards our retirement and paying down our mortgage, we have also been donating more towards our favorite charities. But we’ve also become more comfortable with spending on ourselves and our family and friends. For example, we used to have a rule where we would only dine out on weekends. Now, we may go out on a week night for dinner, and maybe order an appetizer or dessert. It’s the little things, but they do add up. But one of the biggest spends we’ve done was A SURPRISE GIFT OF A EUROPEAN VACATION TO MY PARENTS.

This past Christmas, we dropped the surprise on my parents that we would pay to take them along with us to Europe. It was also a surprise gift to my wife, but needless to say, everyone was both shocked and excited. My parents really haven’t been out of the country before (can’t count Canada), and my wife and I hadn’t visited this part of Europe yet. At first, it was just one country, but as planning progressed, we ended up doing 5 countries in 10 days (not counting 2 travel days).

I hate putting stipulations on gifts, but there had been enough conversations about this topic with my family in the past to know how my parents and wife would feel about who would pay what. Basically, we would pay for travel and lodging, while my parents would pay for meals, sights and souvenirs. Oh, and if you’re wondering, we decided to go to The Netherlands, hoping to see the tulips and windmills. We’ll talk about how that turned out later.

First thing that we had to do was figure out WHEN we would go. I won’t bore you with all the planning details, but we found a certain chunk of time at the beginning of spring, but right before peak (or mid-peak) season began where we could save over a grand just on flights alone. Granted, we risked foul weather with this plan, but since we were there for the experience, not sun-bathing on a beach, we were willing to take that risk.

I’ll be talking about more details, and some of our tips and tricks we used, in a different post, but when it came to a flight, we first had to figure out when all of us could take vacation at the same time, and for how long. We kind of used the dates I was finding to be more economical to help determine our vacation. In the end, I found a direct flight from an airport near us to Amsterdam that was actually cheaper or as cheap as those with connections, and by choosing to fly out and back just a day or two differently, I saved over $1000. Granted, the single biggest cost of this trip were the flight tickets at about $4000 for all 4 of us, but I did get some benefits I’ll talk about in the next post.

Trip Itinerary: What the heck would we do for 10 days?

It was obvious to us that 10 days in just Holland would be a bit too long, and since it was so close to Belgium, we quickly set our sights on the famed city of Brugge (or Bruges, not sure how it’s supposed to be spelled) in western Belgium. It’s a medieval-style city famous for its chocolatiers and beer: a perfect match for my family. But then we still had over half the vacation left to plan. We could go into Brussels, but then a friend demanded that “if you’re in Europe, you HAVE to see Paris”. And sure enough, Paris was only a few hours from Brugge, so we added it to the agenda.

Alright, so now we’re down in France. We didn’t want to take the same way back to Amsterdam, so we looked at the map again and saw we could hit Luxembourg in just a couple hours from Paris. And fortuitously, my wife and I watched a House Hunters International for Luxembourg while planning this portion and decided it was a must-visit. And while we were in Luxembourg, we might as well swing into Germany on the way back to Holland and our flight home.

We did get some assistance from coworkers based out of Europe, or friends who have visited these areas to help identify what we MUST see or what we could do without. However, we’re not “city people”, so we mostly hung to the smaller towns and villages (except our forays into Amsterdam and Paris). We ended up enjoying Brugge so much that we skipped Brussels and added Versailles, France to our agenda.

As you can see, we tend to plan differently than many people. The main goal for us was identify WHEN, then book the first night or two and then go from there. We didn’t go through any travel agency for help; we did it all ourselves.

The next major hurdle was “How do we get around?”. The default answer everyone gives when you mention travel in Europe is “the trains”. But that’s all fine if it’s just a young couple with light luggage, going from city to city, but what about those excursions into the countryside? What if we wanted to sleep in a bit and not worry about missing a train, or maybe change our plans mid-trip?

Since my wife and I couldn’t decide on trains vs a car, my parents offered to pay for half the rental as they much preferred the car option. We ended up renting a car, of course, although we waited until the 2nd morning as we took the train into Amsterdam from the airport to both save stress of parking as well as cost of renting. I really can’t easily compare how much we would have spent on all the train/bus passes for everywhere we went versus the car/parking/fuel, but I think the car option ended up totaling close to $1000 in the end (counting everything related to the car such as rental cost, fuel, rented navigation, and parking).

I don’t have the final tally handy, but after using Google Maps to map out our main routes, we drove over 1500km, or about 1000 miles during this trip. Luckily, I found a rental agency with an unlimited mileage option, but that’s for the other post.

As I mentioned, we just cared about where we would stay for the first night or two. We ended up staying near Schiphol airport for 2 nights (free shuttle to the train station, price, free shuttle to pick up our rental car), then moved on to Brugge, Belgium for another 2 nights. I think, though, that we could easily have done another day there, and we all highly recommend visiting Brugge, Belgium once in your lifetime. I should mention that my employer put me on an international calling plan that had unlimited data, which came in handy for Skyping with family back home and for determining our next lodging.

While planning the trip from the U.S., we booked all the way through Paris, but I didn’t realize we left a night between Brugge and Paris, so we added in a trip to Versailles and stayed nearby. Outside of the first 6 nights (with this extra night added in), we didn’t have our lodging planned, and we did it on the fly while at the hotel in the prior city. We used Booking.com to find places, either 2 rooms for 2 couples or 1 room for 4 adults, for the entire trip, but their iPad and Android apps came in really handy to quickly filter down what, where and when we needed rooms. We booked our nights in Versailles, Luxembourg, Aachen (Germany) and back at Amsterdam airport all based on photos, price and fellow traveler reviews, and every location turned out great in its own way.

How much did we spend in lodging for 4 adults for 10 days? About $2100. Some were budget hotels by airports, some were family apartments in the heart of a city and one was a beautiful farmhouse apartment near Versailles, but in the end, we didn’t regret any of the locations we booked.

So for a surprise gift, with only a few months to plan for 4 adults with wildly different schedules, we ended up spending about $7000 on the big stuff (flight, car and hotels). Add in food, take out reimbursements from my parents, and I think the whole trip cost us about $8000. Honestly, I have no idea how that compares with trips you all have taken, whether booked by yourselves or a travel agent, but the closest I can compare is our trip with a tour company to Israel in 2008 that ended up costing us close to $6000, and that was just 2 of us for about 9 days.

But while I talk about the money, mainly because that’s the focus of my site, the main goal of this gift was the EXPERIENCE. I wanted to experience Europe with my wife AND may parents. While I’ve been overseas 6 times now, my parents haven’t been at all, and my wife and I had never visited Benelux (Belgium, Netherlands and Luxembourg) or the parts of France and Germany we visited this time around. This experience can’t be summed up in words or dollars, and I feel blessed that I could do something for my family like this. We’re still trying to figure out how to get my wife’s parents to take a trip with us, but they have a quite different mindset on travel, so I don’t want it to look like I’m preferring my family at all.

Oh, and since I started by talking about kids, let me finish with them too. At the same time I announced the gift of a European vacation to my wife and parents, I also gifted a similar trip to my sister and her kids to Disney, but we have some time to plan that (whew!). So while we don’t have kids, and thus the “financial burden” of raising kids, we most definitely want to be a part of our family and friends’ kids’ lives through experiences. And instead of showering them all with gifts, we feel that giving the gift of a life experience will be remembered much longer than a toy or game, right?